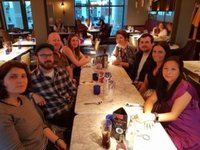 What wind is this that stills the heart That brings raucous waves Yet frolics balloons That harden the flight While pollinating the play. As a gentle breeze Matthew came into our world Filling it with laughter, joy and love. He lived a life of warm embraces And unexpected worldly journeys. He possessed a joyous curiosity And a beautiful mischievous glint. Matthew Mark was an artist. A gathering to honour Matthew Mark will take place on May 4, 2019, at 1 pm at the Centennial Planetarium / Contemporary Arts museum located at 11 St and 7 Ave SW Calgary An endowment fund in memory of Matthew is being considered, please keep this in mind regarding a donation in lieu of flowers, thank you. Matthew Mark Bourree was a significant Albertan artist who served for many years as a cornerstone of the Calgary arts community. From 2010 to 2013 he directed Haight Gallery, a highly acclaimed and fondly remembered exhibition space located in his garage. Matthew named his gallery after San Francisco’s crossroads, Haight and Ashbury, and the “youth who took refuge there, who refused to accept the roles they were handed, and distrusted power.” His curatorial projects were crucial for fomenting relationships across communities, providing emerging artists with important opportunities to develop their practices. He was a member of the Wreck City collective, with whom he produced several large-scale projects, and co-founder of the Bakery Studio Collective with Nate McLeod. MMJT Contemporary, a design and fabrication collaborative with Jeremy Pavka, produced numerous public seating sculptures for Calgary’s St Patrick Island and also created service furniture for St Stephen’s Anglican Church. In 2010 Matthew completed his Bachelor of Fine Arts in Painting at the Alberta College of Art & Design. During his studies he embarked on an exchange and scholarship at The Cooper Union for the Advancement of Art and Science, New York 2008. In 2014 Matthew was awarded the Alberta College of Art and Design Alumni Award for emerging artist. After finishing his studies at ACAD, Matthew went on participate in two residencies at the Banff Centre; in 2008 led by artists Simon Starling and Adam Chodzko and again in 2015 with Ivan and Heather Morrison. Matthew collaborated on a number of projects with artists in the community; a performative large scale outdoor public fire sculpture in collaboration with Sarah Smalik at the Mount Pleasant School and in 2013/4 where he co-curated WE with Yvonne Mullock. WE was a touring provincial and international exhibition exploring both overlaps and distinctions in both Calgary and Glasgow’s art scenes. Most recently in January of this year, Matthew and Alannah Clamp were awarded Canada Council funding to create a project entitled Two-Person School; a performance based work exploring alternative education platforms and psychoanalysis to question power dynamics. In 2017 Matthew received his Master of Fine Arts from the Belfast School of Art in Northern Ireland, was awarded the Royal Ulster Academy Visual Art Award, and was shortlisted for the prestigious Royal Dublin Society Visual Art Award. During his studies in Belfast, Matthew also took part in curated group shows in prominent Belfast artist run centres such as Platform Gallery and Catalyst. During his professional career Matthew was awarded multiple grants from the Alberta Foundation for the Arts, Canada Council, and Calgary Arts Development Agency. His enduring commitment to grassroots and artist-led activities have established an inimitable precedent for future generations of Calgary artists. Artist Statement Matthew Mark Bourree’s work comprised sculpture, drawing, and video, utilizing a wide range of materials including wax, glass, sand, clay, and steel to investigate the relationship and the overlap between human nature and industry. Often taking ephemeral or unfixed forms, his work manifested as indeterminate and deeply poetic reflections on form and process. He took an expanded view of “performance,” and in many instances his work blurred disciplinary and agential boundaries in terms of how performance was regarded, witnessed, and construed. For instance, he recurrently worked with combustible materials, deeming their activity a sort of inhuman performance that reorganized materials to contingent effect. Time was a persistent theme in his work, and several of his bodies of work dealt with the different degrees to which an artist could voluntarily or involuntarily direct the flow of time through artistic media. Smoke and soot-stains were deployed as indexical markers of change or revolution—here, destruction and creation understood as equal parts of an overarching dialectic. For Bourree, fire was significant of reinvigoration, as when forest fires clear space for new growth, but also as a sign of transgression, pushing against staid or stagnant conventions. “Materials are employed by altering their found states and reconfiguring them to emphasize the harsh ephemeral and fragile qualities of the world that surrounds me,” he wrote. “My goal is not to demonstrate an understanding about experience but to show how experience becomes obsessive and compulsions are grown like mold.” By tending to time through the signifier of fire, he was able to demonstrate a precedent for social self-actualization, a way of breaking free from oppressive norms.