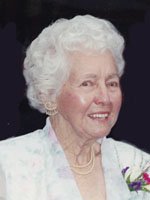 With sadness we announce the passing of our beloved mother and grandmother at the age of 98 years. Helen was only a few weeks short of her 99th birthday. Helen was born in Lethbridge, AB and moved with her parents to Picture Butte as an infant. She attended Battersea District School and Lethbridge High School. Helen was employed by the Hudson Bay Company and T. Eaton. Helen was a member of the McKillop United Church and the UCW. She resided in Lethbridge until 1996 when she moved Calgary to be closer to her family. Helen was the beloved wife of the late Austin W. Graham and daughter of Edward and Emma Landry, pioneers of the Picture Butte District. She is survived by two sons and a daughter-in-law, David of Victoria, BC and Lanny and Patricia of Edmonton, AB; five grandchildren, Darcy (David) Robertson, Brenda (Dean) Slater, Corey (Marc) Arseneault, Jeff (Lisa) Graham and Andrea (Robert)Skeitch; twelve great-grandchildren, 2 great-great grandchildren, as well as a sister Margaret Graham of Oliver, BC. She was predeceased by her brothers Stanley, Ernest and Roy, her sisters, Susan Jones, Lillian Forbes, Beth Fraser and her daughter-in-law, Doris Graham. A Memorial Service will be held at McINNIS & HOLLOWAY’S, Park Memorial Chapel (5008 Elbow Drive S.W., Calgary, AB) on Friday, August 24, 2007 at 10:30 a.m. with Interment to follow at 3:00 p.m. at Archmount Cemetery, Lethbridge, AB. Forward condolences through www.mcinnisandholloway.com. In lieu of flowers, if friends so desire memorial tributes may be made directly to the charity of the donor’s choice. In living memory of Helen Graham, a tree will be planted at Fish Creek Provincial Park by McINNIS & HOLLOWAY FUNERAL HOMES Park Memorial Chapel, 5008 ELBOW DRIVE S.W. Telephone: 1-800-661-1599.