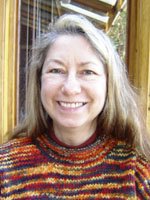 The Goddess Judith is now an Angel Judith passed away peacefully at Agape Hospice on the night of the full moon, Wednesday, January 3, 2007. Judith was one of the first Doulas to be allowed into Calgary Hospitals. She successfully ran the Centre for Family Well-Being Massage Therapy Clinic, which has been taken over by her protégés. Out of that venue Judith developed courses to train other Doulas. Judith will be lovingly remembered by her husband Dean Christie, her son Tony Leland; her sister Virginia Dodds; her brother Mark Johnston, her sister June Byrd and her brother Max Johnston, as well as many more relatives, kindred spirits and friends. Those wishing to pay their respects may do so at McInnis & Holloway’s CHAPEL OF THE BELLS (2720 Centre Street North) on Monday January 8, 2007 from 6:00 p.m. to 8:30 p.m. A Celebration of Judith’s Life will be held in the CENTRE FOR POSITIVE LIVING, 103 Seventeenth Avenue, S.E. on Tuesday, January 9, 2007 at 11:00 A.M. A social gathering of relatives, kindred spirits and friends to follow at the residence of her husband. In lieu of flowers, memorial tributes may be made directly to the AGAPÉ HOSPICE, 1302 – 8 Avenue N.W., Calgary, AB T2N 1B8 Telephone: (403) 282-6588. Forward condolences through www.mcinnisandholloway.com. In living memory of Judith Johnston-Christie, a tree will be planted at Fish Creek Provincial Park by McInnis & Holloway Funeral Homes, Chapel of the Bells, 2720 Centre Street North, Telephone: (403) 276-2296.