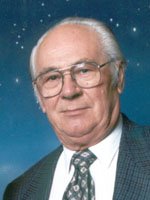 John Matechuk of Calgary, beloved husband of Patricia, passed away at the age of 80 on Friday, November 24 after a hard-fought battle with cancer. John was born on April 25, 1926 in Hamton, SK. He became a teacher in 1944 and began teaching in a one-room school in Woodland, SK. In 1962 he moved to Calgary where he taught at Sam Steele Jr. High and at Bowness High School as a shop teacher. In 1976, John was named Alberta Teacher of the Year, an honour he cherished. John had a life-long love of learning which he passed on to many students in the classes he taught and to his children and grandchildren. John will be greatly missed by his wife Patricia, daughter Linda Bond, son Greg Drew, their spouses Doug and Brenda and grandchildren Drew, Sierra, Reed, and Sabrina. Special thanks to our wonderful doctor, Johannes Lategan, who eased the pain of John’s journey over the past few years. He will always live on, in our hearts. Funeral Services will be held at McINNIS & HOLLOWAY’S Crowfoot Chapel (82 Crowfoot Circle N.W.) on Tuesday, November 28, 2006 at 2:30 p.m. In lieu of flowers, donations may be made to the Salvation Army, Agapé Hospice, 1302 – 8 Avenue N.W., Calgary, AB T2N 1B8 Telephone: (403) 282-6588. Forward condolences through www.mcinnisandholloway.com.