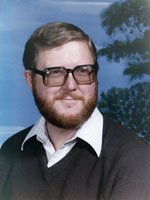 It is with deep sorrow that we announce Paul’s passing in White Rock, BC after a three year battle with cancer. Paul worked for many years as a teacher for the Calgary Board of Education, and as a weekend Disc Jockey for Top Recorded Music. He will be remembered for his kind, helpful nature, devotion to his family and friends, his love of music, pool, and Chinese food, and for his quirky sense of humour. Paul is survived by his loving wife Marsha, son Patrick, daughter-in-law Danielle, and furry friend Simba, as well as extended family in British Columbia and Alberta. He was predeceased by his parents, Paul and Mary, and by his son Terry in 1991. Funeral Services will be held at McINNIS & HOLLOWAY’S Park Memorial Chapel (5008 Elbow Drive S.W.) on September 28, 2005 at 2:30 p.m. Forward condolences through www.mcinnisandholloway.com. If friends so desire, memorial tributes may be made directly to the charity of the donor’s choice. In living memory of Paul Spink, a tree will be planted at Fish Creek Provincial Park by McINNIS & HOLLOWAY FUNERAL HOMES Park Memorial Chapel, 5008 ELBOW DRIVE S.W. Telephone: (403) 243-8200.