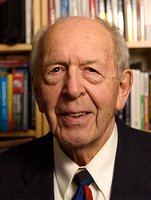 It is with great sadness that we announce the passing of Dr. Robert Paulette, beloved husband of, Jane Ann Poole (nee Campbell) of Calgary, AB.  He passed away after a short battle with cancer on Saturday, March 21, 2020 in his 90th year. Dr. Bob’s faith in Jesus Christ as his Lord and Saviour was firm to the end. (Prov. 3: 5-6; 2 Tim. 4:7-8).

Dr. Bob was a graduate of McGill University’s Faculty of Medicine. Following postgraduate surgical training in New York, and Missouri, he returned to his native Eastern Townships where he became a much-loved and respected surgeon at the Sherbrooke Hospital.  A pillar of the Christian community, he was deeply involved with Grace Chapel, Sherbrooke, and Frontier Lodge Christian Youth Camp. In 2007, he married Ann Poole and moved to Calgary, AB where he lived for the remainder of his life.  Proximity to the Rocky Mountains allowed him to continue his love for photography.  Despite living in Calgary where he gained first-hand knowledge of hockey’s ‘battle of Alberta’, he remained a passionate Hab’s fan.

He is survived by his wife, Ann (Poole); his children, Wendy (Richard), Woody (Diane), Laurie (Marty) and Jane; his grandchildren,  James, Eric, Elly, Edward, Josh, Cameron, and Maggie; his step-children, Peter, Jane, Judi (Phil), Doug (Roselle), and Alex (Hildur); and  his step-grandsons, Sam, Will, Norman and Leif. Also left to mourn are numerous nieces and nephews and a wide circle of friends throughout Canada and the United States. Bob was predeceased by his wife Madge and his siblings Nelson, Uldene, and Doug.

A Memorial Service will be held at a later date. Condolences, memories and photos may be shared and viewed on Robert’s obituary at www.McInnisandHolloway.com. If friends so desire, donations can be made in Dr. Robert Paulette’s name to Frontier Lodge Christian Youth Camp, Frontier Lodge c/o C. Hortop, 2100 chemin Lehoux, RR3 Coaticook, QC, J1A 2S2, 1(819)844-2277, https://frontierlodge.org/support/#Give. A fund will be established to enable children in financial need to attend camp.

The family are deeply grateful for the exemplary care Dr. Bob received during his final days from the staff at the Salvation Army’s Agape Hospice in Calgary.