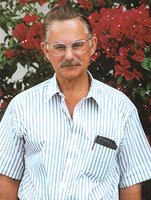 Dr. Jack Wootliff, beloved husband of Ann Wootliff (nee Partington) of Calgary, AB passed away on Wednesday, April 1st, 2020 at the age of 86 years.  He was well loved by his family, his coworkers, and his friends; all of whom would tell you that he never missed an opportunity to find humour in a situation.

Jack started his medical training in Manchester, UK, where he directly entered second year medicine in 1952; something he was very proud of. After graduating, Jack found positions were hard to come by in the UK, so he moved to Canada in 1969 to take on a position as a pathologist at the Sarnia General Hospital. Afterwards, he worked at the Etobicoke General for 5 years.

Looking to get away from the harsh Ontario winters, Jack and his family moved to Calgary in 1979 where he continued on at the Holy Cross Hospital.  Jack would tell you that this was a “most compatible group of people” and that he had no regrets. He was named as the Director of Pathology of the Holy Cross in 1984 and later moved onto the Peter Lougheed Hospital for a good portion of the 1990’s.

A special memory of Jack’s was when he got involved in medical testing for the 1988 Calgary Winter Olympics. He was given a special arm wrap with a red cross and medical “tackle box” to carry around with him. His kids had fond memories of the Olympic pins that his new role seemed to give them access to. Still, Jack made sure to find time to take his family to several of the main Winter Olympic events and ceremonies; Eddie the Eagle, an underdog ski jumper from the UK, being one of the highlights. Complete with thick rimmed glasses, Eddie was the Mr. Magoo of the Ski Hill.

Jack next moved on to the Rocky View Hospital where he worked under Dr. Alan Oryschak, who he fondly referred to as the guy who ran the “Good Ship Lolliput”. He would tell you that the “gossip was good there”.

In retirement, Jack frequented various doctors’ group meetings and shared his knowledge at the University of Calgary. This was his “social fix” where the “Old Docs”, who he would say we’re “all getting older”, provided his weekly dose of entertainment. When there was time, he would sneak in some curling or golf and then later on in retirement would just sit back and be a spectator.

There were many happy “Family Times” for Jack.  Being so close to the mountains, Jack was always game to take the family out to Banff or his boys out to the mountains for skiing; even pulling the kids out of school in the event conditions were perfect. The Rockies likely were the catalyst for Jack taking up his passion of photography. He was relentless at organizing his negatives and flogging his greatest prints at the local photo mat.  Eventually his persistence paid off and he was invited as a sideline photographer at a Stampeders’ game.

Jack was proud of both his accomplishments and those of his family.  He was particularly thankful for the commitment and support from his wife Ann and the medical folks that kept him going. In his own words, Jack was just “sorry that he never finished – tidying up.”

The family would like to thank Dr. Chris Gorrie, as well as the many medical professionals that helped him along the way.

Jack leaves behind his wife Ann; sons, Peter, and Anton (Susan); granddaughters, Katya, and Sonja; and extended family in the UK, Europe, USA, and Australia. He was predeceased by his parents, Leontine and Bernard; and brother Malcolm.

As per Jack’s wishes, no funeral service will be held.  Memorial tributes may be made directly to the Heart & Stroke Foundation of Alberta, www.heartandstroke.ca. Condolences, memories and photos may be shared and viewed at www.McInnisandHolloway.com.

In living memory of Jack, a tree will be planted in the Ann & Sandy Cross Conservation Area by McInnis & Holloway Funeral Homes, Chapel of the Bells, Centre Street North, Calgary, Telephone: 403-243-8200.