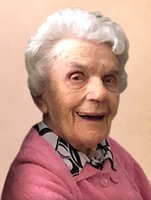 Hazel Noreen Oliver was born in Terrace, BC June 9, 1926, to Marian and Bill Oliver. Noreen lived with her parents and took care of them until they passed away.  Noreen worked at a grocery store and cared for a couple of foster children while in Terrace. She also spent time with her good friends in Terrace and even lived with them for a time. Later on Noreen moved to Calgary and worked at the Fanning Center until she retired and then volunteered at the gift shop there until she could no longer do it.

She was kind and tender hearted and always looked out for the underdog. She felt deep compassion for people and was very true to her Christian faith.  Many felt her kindness and compassion. and She was known for her love of children and animals, particularly cats.

Noreen is survived by her cousins, Dennis and Mona Snyder; and their children Carrie and Devon, Dustin, Melissa and Cort, Krista and Mike; and eight grandchildren, Wes and Carol Nickel along with their children, Anya and Daniel, Jonathan, Katrina and Kyle; and seven grandchildren.  Noreen is also survived by her Terrace, BC family, Clarence (Late Grace Little)–deceased) Warner and their five children Lynne, Dan, Deb, Laurie and Denise.

We wish to thank all the friends who came to visit her in the last few years as well as the staff of Trinity Lodge and Sage Hill Seniors Residence, who were caring and compassionate towards Noreen until she passed.  Thank you for your kindness.

Due to current restrictions for funerals, Noreen’s funeral service will be by invitation only.  There will be a video of the funeral posted on the McInnes & Holloway listing after the funeral.

If friends so desire, memorial tributes may be made to the charity of your choice.  Condolences, memories and photos may be shared and viewed on Noreen’s obituary at www.McInnisandHolloway.com.