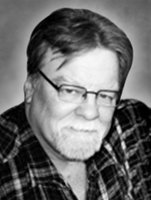 Walter (Wally) Robert Armstrong beloved husband of Terry Lee Armstrong (nee Collins) of Calgary, Alberta, passed away on the 3rd day of May, 2020 at the age of 67 years.

Wally completed high school at the Kamsack Comprehensive Institute in 1972 and after attending the University of Manitoba moved to Calgary, Alberta in 1974 where he met his future wife Terry.

Wally and married Terry were married in October of 1976.

Wally accomplished much through his life but was particularly proud of his family. Although there were SEVERAL bumps along the way he was proud of the successful hard-working adults his children turned out to be and was excited for the future of his grandchildren (even if they affectionately called him Grumpa).

Wally loved to learn and acquire new skills, from a self-taught web designer to a burgeoning baker and master chef, when he wanted to do something he read and researched the topic and put his whole self into it.

Wally had a quick wit and was always there to interject a sarcastic jibe (which was passed on to his children and grandchildren) but some of his more memorable sayings would be “nobody expects the Spanish Inquisition”, and I can’t imagine a family member who grew up around Wally who didn’t experience “The Claw”.

Wally put on a façade that he didn’t like “people” but would always be there when you needed him. A phone call in the middle of the night would not go un-answered and he would do his best to help/un-jam whatever situation he could.

Wally is also survived by his one brother, Lorne Armstrong of Kelowna, British Columbia; as well as numerous nieces, nephews, cousins, and friends.  Condolences, memories and photos may be shared and viewed on Wally’s obituary at www.McInnisandHolloway.com.