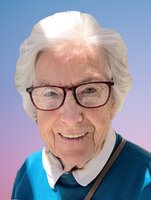 It is with great sadness that we announce the passing of Dorothy Jeanie Metz, of Calgary, AB, on Tuesday, June 2, 2020 at the age of 90 years.

The youngest of six children, Dorothy was born and raised in Bow Island, AB. She graduated from Garbetts Business School in Medicine Hat and went on to marry the love of her life, Ken. Together they saw the world as Ken’s military career kept them on the move, living in France, the United States and across Canada.

Dorothy’s top priority was her family, including the family dog, Peppe. She was an excellent cook and spent many hours in the kitchen preparing delicious treats and meals. She regularly scoured her cookbooks looking for new things to try, hosted bridge groups and military dinners and parties. Dorothy sewed clothing for both her children and their dolls, she helped with school projects, volunteered on school field trips, kissed her children’s booboo’s, and took them on many adventures. Ken and Dorothy enjoyed dinners out, dancing, cross country skiing, bicycling and regularly took their family hiking, camping, canoeing, and on family vacations.  When her daughters had grown, Dorothy lavished her mothering skills on her only grandson, Spencer, and together they shared many Nana-and-Spencer adventures.

Dorothy was fearless in the pursuit of new experiences. In her sixties, she learned down-hill skiing, golfing and went hot air ballooning. She belonged to numerous bridge clubs, hiking clubs, golf groups and bowling clubs, and participated in these activities multiple times a week, into her eighties. She was known for her sense of humour and quick wit and made friends wherever she went. She had incredibly good luck at bingo, lotteries and raffles all of her life and even won a car.  She enjoyed travelling and went on numerous trips to see the world.  For many years Dorothy volunteered at the Peter Lougheed Hospital, Inglewood Bird Sanctuary, Pineridge Elementary School, as well as other volunteering opportunities as they presented themselves.  She was always ready to help out.

Dorothy loved her flowers and kept an immaculate garden and yard.  She cherished the birds that would visit her there.  She enjoyed the arts and held season tickets for the ballet and theatre. The Calgary Stampede and the Stampede Parade were of paramount importance to her and she attended both faithfully every year since 1974, until she just couldn’t and even then she didn’t quit quietly. She was an artist and spent time sewing, crocheting, knitting, needle working, and painting. She designed and sewed many beautiful items including Pat’s wedding dress. She enjoyed board games and puzzles, and when the family monopoly board was lost, Dorothy handcrafted a new game board. She built birdhouses, repaired fences, changed the oil in her car, and even changed a flat tire on the side of a busy highway, refusing assistance from a passerby.  Her car was her most prized possession.

She was both a gracious, poised, impeccably dressed lady and a strong, determined, independent woman who wasn’t afraid of dirt, hard work or speaking her mind.

Dorothy had limitless energy and could laugh and visit well into the night – sleep was never that important to her.

Life’s challenges were faced with a strong will, dogged determination and often times a big bowl of ice cream.  Dorothy never let difficult times get her down and persevered through every adversity with great courage, strength and dignity. Even in her final years when things were difficult she always had that glorious smile and optimistic attitude. Her face would glow with the love inside her.

Her daughters will forever miss their best friend and mom dearly, not only for her friendship, wit, guidance and love but also for their weekly card game of Rummy, in which Dorothy would routinely win, and often by a large margin.

Dorothy was a role model and is an example of a life well-lived.

She will be dearly missed by her daughters Pat (Vaughn) Pollack, and Sue (Trent) deGoesbriand; grandson Spencer (Margaret Wu) Pollack, and great-grandchildren Gabriella, Angelina and Sebastian. She is predeceased by her husband Kenneth George Metz in 1992.

Funeral Services will be held at McINNIS & HOLLOWAY (Chapel of the Bells, 2720 Centre Street North, Calgary, AB), on Monday, June 15, 2020 at 2:00 p.m.  Graveside Service to follow at Queen’s Park Cemetery.  Condolences, memories and photos may be shared and viewed on Dorothy’s obituary at www.McInnisandHolloway.com.