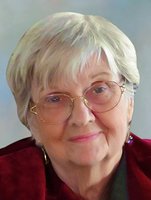 Janet Doris Antonuk, beloved wife of the late Frederick Antonuk of Calgary, AB, passed away on Monday, June 29, 2020 at the age of 90 years.

Janet was born and raised in Calgary and worked as an administrative assistant with the Calgary Board of Education until her retirement. Janet is best known for always being true to herself and her love of family and animals.

Janet is survived by her loving daughter and son-in-law, Cody J. Antonuk and Patrick Ancelin of Bragg Creek, AB; brother Gail R. Reynolds of Cochrane, AB; grandchildren, Ryan (Camila), Landi (Sam), and Kyle (Natasha). Janet was predeceased by her brother Tom Reynolds, as well as her pets, Annie and Pelos.

Thank you to the wonderful, caring staff of Chartwell Eau Claire Care Residence for their compassionate care. Also, many thanks to Dr. Stacey J. Davies for support, guidance and kindness.

A private family graveside service will be held at Queen’s Park Cemetery at a later date. Condolences, memories and photos may be shared and viewed at www.McInnisandHolloway.com.