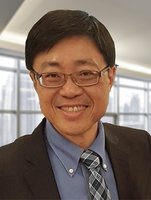 It is with great sadness that we announce the passing of Ken Eng Huat Ng on Tuesday, September 29, 2020. A beloved husband, father and friend, Ken was taken away from us far too soon at the young age of 54.

In 1988, Ken moved to Calgary from his home country of Singapore. With little money in his pocket, he was forced to work full time to fund his mathematics degree at the University of Calgary. It is here that he met his wife of twenty-seven years, Angela, with whom he had two boys, Christopher and Benjamin.

Throughout his career as a software developer, Ken was always known for his light humor and ability to brighten the mood of everyone around him. Always with a smile on his face, Ken exemplified positivity and genuineness. He constantly organized team lunches where he shared his passion for Asian cuisine with his colleagues.

Ken always believed in living life to the fullest. Originally serving in the Singapore Police Force, he continued to remain active as an avid squash player, hiker and cyclist. It is through these adventures that Ken met many of his closest friends, many of whom he maintained strong ties with up to the last days of his life.

As a father and husband, Ken was known for his love and care, always prioritizing the needs of his loved ones no matter how busy he was. Ken was a way finder – a bright light navigating his family towards the best possible future.

Rest in peace Ken, you will be missed by us all.

Funeral Services will be held at McINNIS & HOLLOWAY (Crowfoot, 82 Crowfoot Circle NW, Calgary, AB), on Friday, October 16, 2020 at 2:00 p.m. Condolences, memories and photos may be shared and viewed on Ken’s obituary at www.McInnisandHolloway.com.