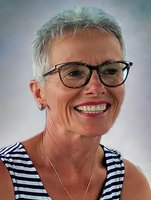 Quietly, courageously, Peggy Hart surrendered into God’s arms on January 19, 2021.  She was 65 years old, her life ending too soon, her brilliant light fading over the past year as glioblastoma took control of her health.

If you knew Peggy, you will have loved her.  And she would have loved you.  Life exploded from her eyes, her smile, her being.  She shared herself unreservedly, unabashedly, and honestly.  And she welcomed you to do the same.

She was beautiful, intelligent, and fun.

Margaret Marie Vlasschaert was born on February 11, 1955, in Chatham, Ontario.  She and her family lived in nearby Blenheim. Blenheim was advertised as the “heart of the golden acres,” although few really knew what that meant.  Her father was Austin Vlasschaert, her mother Angele Vlasschaert (nee Verbeke).

As a child, Peggy was precocious and adventurous, as a teenager, mischievous.  Blenheim would become too small for her.  She found her way through various studies in various locations, eventually acquiring a BA in Psychology from Queen’s University in Kingston in 1979.  She relocated to Toronto and entered the Institute of Child Study, completing her Diploma in Early Childhood Education in 1981.

Education would be a constant theme through Peggy’s life.  She was passionate about learning and teaching, accumulating knowledge and sharing it, enthusiastically.  Peggy received a post-graduate Diploma in Language Arts Education from the University of Calgary in 1994, a Certificate in Ministry from St. Francis Xavier University in Antigonish, Nova Scotia in 2008 as well as a Certificate in Spirituality from the same school in 2012.  In 2017 she completed her Master of Science in Psychology from Divine Mercy University in Hopewell, Virginia – a Masters degree, after many Certificates and Diplomas, being a long-standing ambition.  Peggy was ever an accomplished student.  At Divine Mercy, she received a special award for leadership and example, and she took this honor in stride, humbly.

Peggy migrated to Calgary, where jobs were a-plenty, in 1981 to accept a position as an Early Childhood Services (kindergarten) teacher with the Calgary Catholic School Board, at St. Bonaventure School.  She later taught at St. Bernadette school and was also a special advisor for language learning and program development.

Alas, she would put her teaching career aside, for a while, to focus on other matters.  For after being in Calgary for only one month, she fell in love.  It was a whirlwind romance. She met Jim Hart, also a recent transplant to Calgary, from Winnipeg, in late September.  They were married the following July.  It was a hot summer day in Blenheim, on July 10.

In what seemed like the blink of an eye, three children were born – Brandon Carl, Jessie Marie, and Joel Austin.  Motherhood came naturally to Peggy. As did marriage.

Like different chapters in a book, life evolved as the children grew, and Peggy grew along with them.  Locations changed, from Deer Run to Coach Hill to Glendale then shifted outside of Calgary, into the foothills near Millarville, then to the outskirts of Okotoks.  Peggy worked from home selling educational toys for children, later, selling cosmetics.  She excelled at both.  She became a volunteer at Millarville school, was a Board Member for Foothills Figure Skating Club and for High Country Minor Hockey Association, was the founder of Christian Women’s Breakfast in Black Diamond, and co-founder of Kew Ridge Community Association.  In Okotoks, Peggy was Youth Coordinator and Pastoral Assistant at St. James Parish.  She returned to the classroom to teach religion at Holy Trinity Academy, teaching high school being significantly different from teaching pre-school.  Most recently, Peggy led the RCIA program at St. Mary’s Cathedral in Calgary, introducing adults to the Catholic faith. Her enthusiasm for the Church was infectious.

Through all of this, Peggy found time to sing in her parish choir, she sang tenor for Marty Antonini & Seventh Heaven gospel group, and bass for Rhythm of the Rockies women’s a cappella chorus.  She took up golf and horseback riding and painting, she trained for Family Honor, TeenStar, Calgary Communities Against Sexual Abuse, and Palliative Care.  In retirement, Peggy and Jim traveled around the world, literally, twice.  They developed a particular penchant for long long sea voyages, safaris, and for Cape Town, South Africa.

Peggy enjoyed the occasional beer and skiing (never together), although nagging injuries to various joints limited the latter activity.  She was a superlative bridge player, she preferred whodunnit novels, she was into yoga and boot camp and later in life, took up running. Her cars needed to be fast. She loved to dance.

So much energy, so much zest for life, so much to explore, to give, to enjoy.  Peggy Hart was a gift from God.  She was uniquely alive. She was inspiring.

Peggy waited patiently for grandchildren, and grandchildren came. There are three granddaughters – Avery, Henrietta, and Charlie. Peggy would have loved more time with them.

They say a bright light burns more quickly.  We mourn her passing.  We celebrate what was.  And what continues.

A Funeral Service will be held for 20 attendees, on Sunday, January 24, 2021, at 2:00 pm.  All others are invited to join Peggy’s service streamed live at https://mhfh.com/tribute/details/32410/Margaret-HART/obituary.html#tribute-start.  Everyone is encouraged to participate in the service live; however, a recording will be posted here for those who cannot join us at that time. Condolences, memories, and photos can also be shared and viewed here.