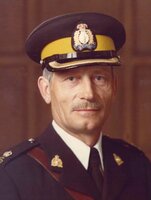 Gus Buziak, dear father, grandfather, and friend, of Calgary, AB, passed away on Tuesday, September 14, 2021 at the age of 88 years.

Gus was born on his family’s farm in the Redfield area of Saskatchewan and raised in North Battleford.

To help support his family, he got his first job at age twelve, setting pins in a bowling alley. At fourteen, he packed groceries at the Co-op. After graduating from high school, he managed a Co-op store in Speers, Saskatchewan. He would later say that one day he got tired of listening to complaints about wilted lettuce, looked across the street at the local RCMP detachment, and decided that would be a much more interesting job. It resulted in a career that lasted thirty-two years. He was stationed in many small towns in Southern Alberta before being transferred to the Calgary Detective office in 1957. He remained in Calgary for fourteen years before being transferred to Edmonton in 1971. He received an officer’s Commission in 1977 as an Inspector and was the Assistant Commanding Officer and then Commanding Officer of ‘K’ Division’s elite Commercial Crime section. In 1980, he was one of two Canadian police officers chosen to attend the FBI Academy in Quantico, Virginia. During his career he provided security for numerous luminaries, including Queen Elizabeth and her family, the Crown Prince of Japan, Canadian and foreign politicians, and Pope John Paul II.

In 1986 he retired from the RCMP and returned to Calgary to become Director of Corporate Security for Gulf Canada, which included travelling across Canada and the Arctic. After retirement from Gulf, and not quite ready to ‘take it easy’, he took a position as security for a Canadian mining company in Kyrgyzstan, which found him up mountains at over 10,000 feet and speaking Russian to locals. Upon returning to Canada, he decided to participate in the organization of elections. He oversaw many successful federal and provincial campaigns, including those of Jon Havelok, Attorney General of Alberta, Cindy Ady, Minister of Tourism, Stockwell Day for the leadership of the Canadian Alliance Party, and Jason Kenny, federal Minister of Immigration. Having had enough of politics, he undertook organizing the design, casting, and placement of a statue of Colonel James Macleod, which was dedicated at Fort Calgary in 2005. He also arranged for the creation of a second statue for the RCMP headquarters in Ottawa. For his various acts of public service he received the Queen’s Golden Jubilee Medal in 2002, the Alberta Centennial Medal in 2005, and the RCMP Commissioner’s Volunteer Award in 2005.

Gus was a great supporter of his wife Janis and was her right hand for fundraisers and silent auctions, as well as her designated chauffeur for charity canvassing, enumeration, and census duties. Throughout his life he also played the role of head chef for many barbecues organized as social events or fundraisers. He was also involved in fundraising for the churches he attended, as well as his children’s schools.

The loss of Gus is the loss of a wonderful father, a reliable supporter, and a great humourist for his children, grandchildren, friends and family.

He is survived by his daughter Kelly, son Todd, daughter-in-law Benet, and his grandchildren Isabella and Gabriel. Gus was predeceased by his beloved wife Janis, his parents Justina and Nicolas Buziak of North Battleford, his brothers, Henry, Albert, Morris, and Edward; and his sisters, Victoria, Amelia (Millie) and Katherine (Kay).

Funeral Mass will be celebrated at St. Patrick’s Catholic Church (1414 Shawnessy Boulevard S.W., Calgary, AB) on Tuesday, September 28, 2021 at 1:00 p.m. Family and friends who are unable to attend in person are invited to join Mr. Buziak’s Prayers and Tributes and Funeral Mass streamed live (see below) on the day of the service. For those who are unable to view live, a recording of the service will be posted. Condolences, memories and photos can also be shared and viewed here.

August's memorial card can be viewed using this link