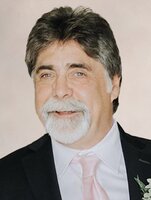 In loving memory of Larry Bonazzo, who passed away on Wednesday, November 17, 2021, after battling cancer, at the age of 63 years.

Larry was born on July 5, 1958, in Fort William, Ontario to Laurence and Shirley Bonazzo. He grew up in Thunder Bay, where he raised his family. Larry was proud of his children and enjoyed watching Jamie dance and Sean play hockey. He grew up with a love for hockey; he played goal starting in PeeWee with the Elks. He later played in the Stanley League with the Murillo Blade Kings where he won the “Stanley Cup”.  He enjoyed playing in the beer league until leaving the Thunder Bay area. In more recent years, Larry took great pride in watching his son-in-law, Marcus, play college and professional hockey. Larry attended George Brown College and became a Red Seal Steamfitter, working in the trade until becoming a partner in Boreal Mechanical Contractors in Thunder Bay. While working with BMC, he met his wife Sundae. Later he went on to work as a Project Manager with Ainsworth in Toronto and then TC Energy on various projects throughout Southern Ontario and Texas.

He was passionate about restoring classic cars and spent many weekends organizing, volunteering, and participating in car shows wherever he happened to be. Larry was the former President of Thunder Bay Street Machines and over his lifetime owned an estimated 20-30 show cars. Larry was also an avid motocross enthusiast, having enjoyed riding all his life. He was fortunate enough to ride up until the last few weeks. Following his last ride, he said he was “happy to go out riding red”, referring to one of his favourite Honda’s. Larry had a tremendous talent for restoring vintage dirt bikes, and since his retirement, had turned his passion into a business when he and a friend opened Westcan Vintage MX & Off-Road. He loved to share his wealth of knowledge and restoration techniques with other dirt bike enthusiasts. He had a great appreciation for all dirt bikes, but ones of the 70’s era had a special place in his heart, as evidenced by his collection.

A private family celebration of life will be held at a later date. Condolences, memories, and photos may be shared and viewed here.

In lieu of flowers, donations can be made to PRO Kids, Thunder Bay (https://www.thunderbay.ca/en/recreation/donate.aspx). Funds will be used to help kids have access to sports.