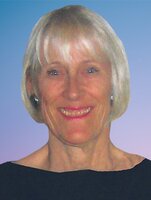 It is with great sadness we announce the passing of Cindy Johnson, on Wednesday March 16, 2022, at the Southwood Hospice at the age of 73 years. Cindy passed away peacefully with her son Brian and stepsons Paul and Eric by her side. Cindy had been dealing with Pulmonary Fibrosis since 2016.

Cindy was born on March 29, 1948, in Schenectady, New York, as the middle child of 3 sisters. Growing up her family moved to various cities in the northeastern US, to accommodate her father’s career working with General Electric. From a young age, Cindy enjoyed playing piano and golf, two activities she continued doing up until her final years.

In college Cindy moved to Erie, Pennsylvania, where she attended Penn State University, and received a degree in Recreation Administration. It was there she met her first husband, and the two of them relocated to New Orleans, where Cindy worked as a library assistant in an all-black school. Neither of them enjoying the south, they would relocate to Calgary, Canada for work in 1974.

In 1983 Cindy married her second husband Phil, whom she stayed happily married to until his untimely passing in March 2015. In 1984 Cindy gave birth to her son, Brian Johnson, as well as played an active role in being part of her stepson’s lives, Paul and Eric Johnson.

Cindy always maintained a great appreciation for the outdoors, and for many years could be found in the mountains camping with her family, skiing, hiking, and snowshoeing. She also continued her love for music throughout her life and sang with the Calgary Festival Chorus up until only a few years before her passing.

Cindy and Phil were active in volunteering in the community, working each Wednesday for many years building homes around Calgary with Habitat for Humanity. In 2005, she went back to New Orleans to help clean up after Hurricane Katrina, with her younger sister Ann. Cindy was very fortunate in her later years to travel many places around the world and enjoyed scuba diving together with Phil when they were in the tropics.

Cindy is survived by her son Brian, and stepsons Paul, and Eric; her grandchildren, Xyler, Astrid, Elliot, and Hazel.