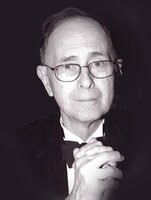 It is with immense sorrow that we announce the passing of Charles Davies, much loved husband of Caroline Davies, on Friday, April 1, 2022 in Calgary, AB.

Charles was born in Birmingham, England, but moved to Portsmouth to avoid the bombings during WW2.  He attended Portsmouth Grammar School and excelled as a student.  He was awarded a Demyship from Magdalen College, Oxford at 13 years of age.  His parents felt he was too young to go off to University so with three years to spare, he spent much of the time studying Comparative Religions.   He found the subject fascinating but sadly could never reach a decision on a Religion that left no questions unanswered.  He never gave up on this quest however and often browsed through a huge book on Religions which was always on his bedside table.  He completed his medical training at the Radcliffe Infirmary in Oxford and then Joined The RAMC (Royal Army Medical Corps). He travelled all over the world and it was while he was serving at the British Military Hospital in Rinteln, Germany that he met Caroline, a nursing officer with the Queen Alexander’s Royal Army Nursing Corps.  He retired from the Army after 24 years of service having reached the rank of Lieutenant Colonel.  They immigrated to Canada in 1975 and married in Winnipeg in 1976.

Charles’ career in Anaesthesia began at the Grace Hospital in Winnipeg where he worked for four years before moving to Calgary.  He accepted a position at the Holy Cross and then moved to the Rockyview General Hospital where he served as Chief of Anaesthesia for ten years.  Not quite ready for retirement, he changed paths and worked as a doctor for the Dr. Bernstein Health and Weight Loss Clinic for seven more years.  He really enjoyed this work and always said that he felt that he had saved more lives there than as an Anaesthestist.  He retired at age 84.

Throughout his life he took great pleasure in fishing, gardening, orienteering, reading, and was a long time Stampeders season ticket holder. He also loved the Philharmonic, the Opera and the Ballet.

His generosity was remarkable.  No one ever left empty handed.  It is therefore no surprise to learn that Charles arranged to donate his body to the University of Calgary, Faculty of Medicine upon his death.  We are very grateful that his body was accepted, especially in this time of Covid and he now awaits his next medical adventure.

A Celebration of Life will be held at McInnis & Holloway (Crowfoot, 82 Crowfoot Circle NW, Calgary, AB), on Saturday, May 14, 2022 at 2:00 p.m. Reception to follow in the Hospitality Centre at the Funeral Home. Family and friends who are unable to attend in person are invited to join Dr. Davies’ service streamed live (see below) on the day of the service. For those who are unable to view live, a recording of the service will be posted. Condolences, memories and photos can also be shared and viewed here.

A very special thank you to Dr. Stacey Hall at Seniors’ Health Clinic at Rockyview General  Hospital for taking such good care of Charles and always making herself available to me when I needed her support,   Dr. Katherine McKenna at the Foothills Medical Centre who led us through the most difficult week of our lives with kindness, compassion and respect.  We will never forget either of you.

We would also like to express our enormous gratitude to Brad and Nicole (owners of Vytality At Home) and their incredible caregivers, without whom, we could not have been able to care for Charles at home.  We especially wanted to mention Jonathon, Annette, Nancy and Seun for their gentle care and respect.  And to many wonderful friends and neighbours who kept our fridge full so we never went hungry.  Thank you to you all.

It was Charles’ wish that in lieu of flowers, if friends so desire, memorial tributes made directly to The Alzheimer Society of Calgary, 800, 7015 Macleod Trail S.W., Calgary, AB  T2H 2K6, Telephone: (403)290-0110, www.alzheimercalgary.com, the Alberta Society for the Prevention of Cruelty to Animals (SPCA), https://www.albertaspca.org/, or to the charity of your choice, would be very much appreciated.