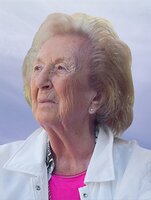 Patricia was born in Croydon, England, south of London, shortly after the end of the World War 1, the year women got the vote. Her father Dudley was from Thunder Bay, Canada, an Army doctor who contracted polio when Patricia was just four years old. In order to focus on his treatment, the family sent Patricia to Woodlands boarding school on her fifth birthday, later sending her to St. Philomena’s girl’s public school in Carshalton when she was eleven. Patricia briefly studied nursing in London before war loomed and the family could no longer afford her tuition. Patricia survived the blitz in 1941 from the basement of her Epsom home. Epsom was a favorite dropping off point for German bombers not wishing to return home with bombs on board after their devastating raids on London. Epsom thus suffered extensive damage as well. Patricia married her first husband, Stanley Slinger, in the same year and her first son Michael was born in 1943. Stanley, a Major in the British Army of Occupation, moved the family to Germany in 1946 where their daughter Jennifer was born in December. Patricia often talked of the appalling conditions German civilians had to suffer but nonetheless how wonderful they were to her in the maternity hospital in Wuppertal.

Patricia returned to England in 1948 with a German nanny in tow but no husband. She supported herself by working in a country pub, where she would meet her second husband, Norman Colbeck, a divorcé with four young children in his care.

Patricia and Norman married in 1950 and set up house in rural Hampshire with six children. Patricia was just 30 at the time. Six children became seven when Norman and ‘Pat’s’ son Julian was born in 1952.

Patricia’s pub experience and interest in food saw the family move to Henley-on-Thames in Oxfordshire to run The Royal Hotel, a rambling Edwardian pub on the banks of the River Thames.  Subsequently they moved to The Castle Inn at Benson and then onto the famous Rose Revived in Newbridge, one of the most picturesque pubs in England, on the Thames. Patricia had by now become an accomplished cook and had trained at the Constance Spry school in flower arranging. The Rose lost their chef a few days before Christmas 1970. With a packed dining room booked, Jennifer’s young husband, who’d arrived from France as a waiter, volunteered to step in. Raymond Blanc quickly proved to be a naturally gifted chef, who would ultimately become one of the top chefs in the world. As Chef Patron of Le Manoir Aux Quat’ Saisons and presenter of numerous hit TV shows, Raymond was awarded an OBE by the Queen in 2008. Patricia sold the Rose Revived after Norman died in 1985, devoting her time to creating magnificent flower arrangements at Le Manoir and volunteering at the Oxford Citizen’s Advice Bureau, a charitable organization specializing in social, housing, and legal issues; something she had a flair for and thoroughly enjoyed.

Patricia got to know Ian Mackenzie, the son of UBC English professor Mabel Mackenzie whose husband was the renowned book collector Norman Colbeck and Patricia’s ‘Norman Colbeck’s’ first cousin! Ian and Patricia married in 1995, moving to Ian’s hometown of Calgary, AB soon after.

Life in Calgary was busy and bustling, and Patricia developed a new circle of friends at The Glencoe, where Ian was a keen and valued tennis player and at various book clubs in the city. They enjoyed giving dinner parties, travelling, and visiting their various children and grandchildren around the world.  Patricia enjoyed an entertaining 80th birthday weekend in Las Vegas; she was always a keen gambler and an ace at both poker and Bridge. Patricia’s 90th was spent at her daughter and granddaughters in Barbados and on her 100th she hurled herself out of a plane at 18,000 ft. in Monterey, California, garnering what her family believe is a world record at that height.