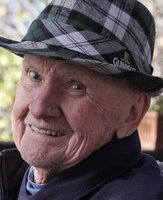 Bob Wilson of Calgary, AB, passed away on Monday, May 23, 2022, at the age of 87 years. After great strides health-wise over the past few months he suffered a stroke on Friday, May 20, and sadly was unable to recover.

Bob is survived by his four daughters, Susan Durtnall (Simon), Toni Wilson, Stacey Medd (Brian), and Jennifer Wilson (Brent Tegelberg); and his three grandchildren, Evan Medd, Riley Medd (Mitchell Gillrie), and Lauren Marshall. Bob is also survived by his sister, Dorothy (Snookie) Kaiser; niece and nephews, Diane, Ian, and Glen Kaiser. Also his niece and nephew, Cathy and Marke Antaya; niece, Tammy Aubin; sister-in-law, Donna Graham; niece and nephew, Marion and Graham Tuson; and nephews, Jamie and Glenn Tuson.  In addition to family members, he will be missed by special friends Maggie Montgomery and Gladys & Walt Ebel. Bob will also be missed by an amazing group of neighbours on all four sides of his home who were always looking out for him. Heartfelt thanks to Anthony & Greg Cone, Brian Story, John Ormrod & Joanne Harder, and Jim & Charlene Shaw.

Bob was predeceased by his wife, Catherine (Cathy) Wilson; his parents, Dorothy (Toddles) & Albert (Al) Wilson; his aunt, Henrietta (Hettie) Moffat and his sister-in-law and brother-in-law, Darlene & Art Antaya. He was also saddened by the passing of his good friends and golf buddies Albert Crooks, Hugh McCutcheon, and Dick Swift.

Bob was born in Calgary, AB on June 10, 1934. He was a pharmacist and drug store owner in southwest Calgary his entire career. As a boy, he worked in a drug store making deliveries. In his late teens, he worked on the Alaska Highway. After graduating from Western Canada High School he went on to the University of Alberta and graduated with a degree in Pharmacy in 1956. After graduating he worked at Bamforth Drug and then at Kirby Drug which he would eventually purchase. After closing Kirby Drug he purchased Glamorgan Drug and then in later years worked at Sarcee Pharmacy where he retired.

He would always say that he felt lucky to have a job that he loved. As a pharmacist, he has touched the lives of so many people over the years and those people meant everything to him. With his infectious sense of humour and kind demeanour he was loved in return by so many people. Most folks look forward to retirement but he wished he never had to stop.

Family, friends, and laughter are what Bob valued the most. All these things came together during summers spent at Christina Lake, BC. Our family began vacationing there in our big blue canvas tent in the 60s and then purchased a cabin at the Alpine Resort. These times have created endless memories and so many good friends. His neighbourhood pub The Regal Beagle was also a special place for him to laugh, socialize and share a beer with all the friends he made there.

Bob was a self-professed ‘sports freak’.  He was an avid golfer and over the years also enjoyed curling, badminton, water and snow skiing. He loved watching football, hockey, golf, tennis, and the Olympic games. He also loved nature and enjoyed walking at Glenmore Park and feeding the birds at the Weaslehead Flats as well as in his own backyard. He enjoyed working in the yard, planting flowers, and aspired to have the greenest lawn on the block. Weather watching was a daily routine especially when rain or snow storms were building. Music was also a passion for Bob. The crooners, big band, jukebox oldies, country music, and Christmas tunes were all on his playlist. Movie musicals were also a favourite of his.

Our family would like to thank the staff at Silverado Creek Seniors Community for the care they gave to Dad and for the kindness they showed us at a very difficult time.

A Celebration of Life will be held at McInnis & Holloway (Park Memorial, 5008 Elbow Drive SW, Calgary, AB) on Friday, September 9, 2022, at 2:00 p.m. Reception to follow in the Hospitality Centre at the Funeral Home. Family and friends who are unable to attend in person are invited to join Bob's service streamed live (see below) on the day of the service. Condolences, memories, and photos can also be shared and viewed here.

If friends so desire, memorial tributes in Bob’s name may be made directly to The Heart and Stroke Foundation of Canada www.heartandstroke.ca.