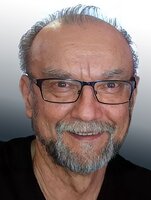 Joseph Brasic, beloved husband of Darlean (nee Martsinkiw), passed away on Friday, July 8, 2022, at the age of 71 years.

Joseph was born in Pribic, Croatia on December 22, 1950, the first and only son of Slavko and Barica Brasic.  He and his family immigrated to Canada in 1958 and he became a Canadian shortly thereafter.

Joseph became a professional engineer after graduating from the University of Alberta with a degree in electrical engineering; within his career he specialized in the radio frequency telecommunications field. He worked enthusiastically at his profession until the end of his days. He was also passionate about a significant number of hobbies, and he thoroughly enjoyed activities and travelling with his family.

He frequently said, “What doesn’t kill you makes you stronger.”  And he lived by those words, tackling his pursuits fearlessly.

A memorial service will be held at St. Peter's Lutheran Church (George Fox Trail, Cochrane, AB), on Saturday, July 16, 2022 at 1:00 p.m., with a reception to follow in the Hospitality Centre at the church. Condolences, memories, and photos may be shared and viewed here.