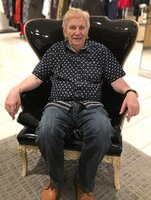 Henry (Gary) Cain, beloved husband, father, and grandpa passed away peacefully on Friday, August 5, 2022, at the age of 83 years.

Gary graduated from St. Mary’s High School in Calgary, where he captained the football team showing his leadership at a very young age. He then went on to St. Joseph Seminary in Edmonton to study theology. He was a proud Calgarian and never missed a Calgary Stampede. Gary loved spending time at the Cain Family Ranch in Bragg Creek since the 1950s. He always had a passion for travel, taking his own family on so many vacations throughout Washington and California, with Disneyland being a real favourite spot. He then later settled in our family home in Las Vegas for the winters.

Gary was extremely devoted to the Catholic faith, attending Mass daily. He spent many years and countless hours with the Society of St. Vincent de Paul. He was very proud to be honoured as a prestigious Fourth Degree Knights of Columbus member. Gary always had a smile on his face and was the first person to help someone in need. He was constantly showing compassion for friends, family, and strangers that were aging or in need of a helping hand.

Funeral was held at St Mary’s Cathedral on Tuesday, August 30, 2022, at 1:00 p.m. Graveside service to follow at St Mary’s Cemetery. Condolences, memories, and photos can also be shared and viewed here.