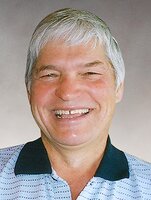 Jonn Kapjek, beloved husband of Fay Kapjek (nee Sponholz), of Calgary, AB, passed away on Saturday, August 6, 2022, at the age of 76 years.

Jonn was born in Elk Point, AB on March 2, 1946. He moved to Edmonton, AB when he finished grade twelve to study Geological Technology at NAIT.  After graduating, he worked for Imperial Oil.  When Imperial Oil’s head office moved to Calgary, Jonn followed the company. It was there that Jonn met Fay, the love of his life, skiing with the Calgary Ski Club. They were married in April of 1978 and welcomed a baby girl, Maryanna, into the world in 1981.

Jonn was the happiest when he was dancing, playing hockey, listening to live music, hunting, fishing, horseback riding, ATV riding, and hiking. For many years, he was an active member of the Sarcee Fish and Game Association, as well as the Calgary ATV Association. While a member, Jonn and Fay went on many family weekend rides and camping trips in the Alberta Foothills. He was famous for the spit-roasted garlic whole hog he made for every campout. His ideal holiday was to take the truck and camper out with the boat to fish or water-ski. As an avid hunter and outdoorsman, his favourite place was to be out in the wild, where it was just him and the wilderness. He shared his love of the outdoors with his family and friends as often as he could.

Jonn loved fiercely in the only way he knew how.  He wanted the best for everyone; he’d be under your car, fixing a plumbing issue, completing home repairs he saw that needed to be done, or explaining how to do them over the phone. He would also lend you anything he had if it would make things easier for you.

Besides his loving wife, Jonn is survived by his daughter and son-in-law, Maryanna (nee Kapjek) and Sandor Arendse; and his two grandchildren, Nathan and Ivy, of Portage la Prairie, MB; as well as nieces, nephews, cousins, and friends. Jonn was predeceased by his parents Louis and Mary Kapjack (nee Palynchuk).

Graveside Service will be held at Queen’s Park Cemetery (3219 4 Street NW, Calgary, AB), on Thursday, August 11, 2022, at 10:00 a.m. Please meet at the entrance at 9:45 a.m. to follow the McInnis & Holloway vehicle. No reception to follow. Condolences, memories, and photos may be shared and viewed below.