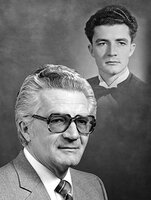 Henry immigrated to Canada with his parents and older sister, Frieda, in 1924, amidst the turmoil following the Russian Revolution. He spent his childhood years on a farm near Herschel, Saskatchewan, where his parents, Bernhard and Margaretha Sawatzky, raised six more children during challenging times in the 1930s. As “a kid of the Depression,” Henry grew up to waste neither money nor time.

After finishing high school at Rosthern Junior College, he went to Normal School in Saskatoon, then taught in Choiceland as the principal of a two-room school.

In 1943, he joined the Royal Canadian Naval Volunteer Reserve and served as a basic training instructor in Saskatoon, after which he was transferred to the East Coast where he took advanced training in submarine detecting and posted to the H.M.C.S. Frontenac, a corvette that provided escort duty in the perilous North Atlantic.

Following the end of the Second World War, Henry returned to Saskatoon, first attending Carson College for returning veterans, and then the University of Saskatchewan, where he graduated with a degree in physics. He married his sweetheart, Elizabeth (Betty) Reimer, a nurse, in 1948, and together they raised four children.

In 1950, Henry joined Petty Geophysical Engineering Co., a seismograph company, taking Betty and their two young boys (Allan and Neil) on a trek through many small communities across southern Saskatchewan. Their nomadic life on the field crew is captured in Betty’s award-winning book Doodlebugging in Saskatchewan – A Wife Remembers 1950–1954. The family finally settled in Regina in 1954 when Henry was hired by Saskatchewan Mineral Resources as the province’s first geophysicist. Their two daughters (Lorette and Dianne) completed the family.

Among his career achievements was the preparation of the Composite Seismic Map of Southern Saskatchewan that led to the successful exploration of the province’s oil, gas, and potash resources. His original map, drafted by hand in 1956, is now preserved in the Provincial Archives.

Henry joined Francana Oil and Gas Co. in 1967, which led him to Calgary in 1969, where he later became president of Shelter Hydrocarbons and eventually formed H.B. Sawatzky Enterprises Inc., a private consulting firm.

Another career highlight was Henry’s discovery and documentation of the Viewfield subsurface crater in southern Saskatchewan. His scientific paper on this subject won the 1972 Canadian Society of Exploration Geophysicists Best Paper Award and led to the honour of presenting his findings at an international symposium attended by members of NASA in 1976. In recognition of Henry’s contributions, he was named to the Geoscience Honour Roll of the Saskatchewan Geological Society in 2005.

As a young man, Henry excelled at sports, and enjoyed competing in track and field events and playing hockey. In later years, he kept active by curling and playing golf. He scored a hole-in-one at age 70 and continued to skate at the Calgary Olympic Oval until age 90.

Henry and Betty also enjoyed many travels throughout the world together and attending cultural and theatrical events. During his years in Regina, Henry performed with Regina Little Theatre in the award-winning production of The Rainmaker in 1957, and was in the very first cast of The Trial of Louis Riel in 1967, now considered the longest-running historical dramatic production in North America.

Henry was predeceased by his loving wife of 64 years, Elizabeth (Betty) Sawatzky, in 2012, and by his siblings Frieda (Henry) Heinrichs, Hilda Sawatzky, Erna (Eric) Lepp, Albert (Jessie) Sawatzky, and Martha (Menno) Nickel; by his brothers-in-law, John Reimer and Wes Heinrichs; by his cousin, Pete Plett, and by his uncle, W. Peter Sawatzky. He is survived by his sisters, Helen Reimer, and Elsie Heinrichs; and by his cousins, Mert Epp and John Plett.

Modest about his own achievements, Henry loved to hear of the varied accomplishments of the Sawatzky clan. He was a gentleman and a straight-shooter who lived a life of integrity and quiet support of others, earning the respect of all, and instilled these strong values in his family. He will be dearly missed and forever remembered by his children, grandchildren, and great-grandchildren:

Both Henry and Betty valued the importance of education. In their memory, donations may be made to a charity of your choosing or designated to the Elizabeth (Reimer) Sawatzky Creative Writing Award, c/o Rosthern Junior College, 410 6th Ave. Rosthern, SK, S0K 3R0. https://www.rjc.sk.ca/donate/

Those wishing to pay their respects may do so at the Celebration of Henry’s Life, which will be held at McInnis & Holloway (Park Memorial, 5008 Elbow Drive SW, Calgary, AB) on Saturday, September 24, 2022, at 2:00 p.m. Interment is planned for Woodlawn Cemetery, Saskatoon, Saskatchewan, Saturday, October 1, 2022. Condolences, memories, and photos can also be shared and viewed here.

Our grateful thanks to the following caregivers who have provided exceptional service: Dr. Elaine Bland, Dr. Eric Dantzig and the Unit 66 Nursing staff at the South Calgary Health Campus, and the friends, staff, and administration at Amica Aspen Woods Senior Living Residence.

In living memory of Henry Sawatzky, a tree will be planted in the Ann & Sandy Cross Conservation Area by McInnis & Holloway Funeral Homes.