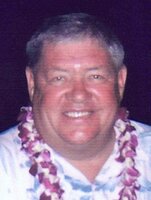 Bernie Gordon, beloved husband of Judy Gordon (nee Reagan) and beloved father of Karly Stobbe, passed away on Sunday August 21, 2022, at the age of 75 years.

He leaves behind Judy and Karly, his son-in-law David Stobbe; and grandchildren, Hannah, Holly, and Micah, his brother Garry Gordon and family who live in Boulder, Colorado. Bernie was predeceased by his loving son Ryan in 1989, and his parents Bill and Elsie Gordon, his other mother Jeanne Reagan, his best friend Dennis Teters, and many other beloved family and friends.

He attended Ernest Manning High School in Calgary, where he met many lifelong friends. Football always played a big part of his high school years, and his love of football continued for his entire life.

Bernie worked in the insurance industry and the oil industry throughout his career. Many memorable years were spent living in Brooks. Bernie was actively involved in his children’s lives, and he especially enjoyed coaching Ryan’s hockey. Bernie and his family returned to Calgary in 1988, where they lived in Okotoks. Bernie resumed his career in the insurance industry at the Alberta Motor Association (AMA). He retired in 2011, and then was able to enjoy his annual trips to Maui, where he often shared time with his friends, and his family. Bernie’s last days were surrounded by his family, and he will be deeply missed by everyone who knew him. May you rest in peace Bernie, we will see you when we get there.