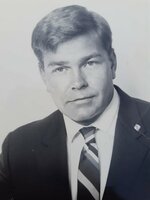 It is with profound sadness that we announce the passing of John Vernon Myers on Tuesday, September 6, 2022, surrounded by his wife, Angela, and their three children.

At heart, John was a country boy, growing up on the family home of 40 acres at Pine Creek along Highway 2. He enjoyed the benefits of living on an acreage including having his own pony. Pine Creek’s one room school having closed, John’s education began at Okotoks, which involved an hour-long bus ride there and back. After completing junior high in Okotoks, he attended Henry Wise Wood high school where he met his wife “Angie”, forged many lifetime friendships, and where he played junior and senior football.

After high school, John attended the University of Calgary, where he studied economics, graduating in 1980. It was just after his graduation that he and Angie were married. He then enrolled in SAIT’s journalism program which he completed the following year.

John’s education landed him a job with Harald Gunderson who published a series of magazines. It was while working as a reporter for Harald’s Emergency Medical News that John attended the scene of the tragic Hinton train accident, an event which profoundly affected him.

In 1981, John’s father, Vernon, convinced John to move to Spokane to work as a writer and researcher for the Myers Finance and Energy newsletter. There John was in his element, engaged in matters which shaped the economy.  Besides his research, he helped craft the letter’s advice to its subscribers and travelled extensively worldwide to conferences where investors and their advisors gathered.

After Vern’s passing in 1990, John assumed the role of publisher of the newsletter, with all the responsibilities that entailed. After some years, he decided to sell the business and move the family back to Calgary. From there, John successfully carried on his career as a journalist and economic commentator. Unfortunately, in his later years, John suffered a series of health issues which limited his ability to fully enjoy his life. However, that didn’t stop John from enjoying the company of his family and the friends he had made over the course it.

John is survived by his lifelong partner, Angela; and their children, Richard (Meredith) of Glenalmond, Scotland and Matthew (Kari-Lynn) and Sarah (David Hamilton) of Calgary; his beloved grandchildren, Logan, Thomas, Griffen, Marcus, Lily and Claire; and his siblings, Brian (Cheryl), Norma, and Richard (Carol E.). John was predeceased by his parents, C.V. and Muriel, his sister-in-law, Carol Audrey, and his nephew, Graham.

Besides his supportive family, John wanted to recognize his longstanding friends, particularly Dave Underdahl and Roy Berg who always stood by him.

At John’s request, no service will be held. If friends so desire, memorial tributes may be made directly to the public health charity of your choice. Condolences, memories, and photos can also be shared and viewed here.