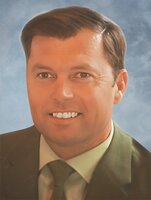 Branko Hrstić, beloved husband, father, and grandfather, passed away on Sunday, September 11, 2022, at the age of 91.

He was born in Grab, Croatia (Hercegovina) on April 26, 1931, to parents Karlo and Anica. As the eldest son of five children, he took pride in supporting his family. In his youth, he was an accomplished short distance runner and boxer. He married the love of his life Anica in 1958, and together they left for Italy in 1960. In 1962, with his wife and daughters, Branko immigrated to Canada, arriving at Pier 21 in Halifax, where his love of Canada began. The following spring, they travelled west by rail to Picture Butte, Alberta, eventually settling in Calgary, where he remained until his passing.

Branko was a risk taker whose hard work and sacrifices were reflected in his achievements. Still standing in Veljaci, is the church he built after completing his masonry training in Mostar. An entrepreneur at heart, once in Calgary he successfully built his own business. His work can be seen throughout the city, including at the Foothills Hospital, the Calgary Zoo, and in countless commercial and residential projects.

Branko was proud of his Croatian heritage and was a founding member of the Marija Bistrica Parish, where he continued to volunteer throughout his life.

A man of few words, he will be lovingly remembered for his beautiful smile, his sharp wit, playful spirit, lifelong friendships, and his deep love for his family.  He was a skilled chess and bocce player, and an avid hockey fan. Bottles of his homemade wine and infamous rakija would often appear at celebrations.

The family would like to thank Dr. Hawegi and Branko’s primary caregivers, Marijo and Jeanette, for the compassionate care they provided Branko in his last few years.

A Funeral Mass will be held on Tuesday, September 20, 2022, at 11:00 a.m. at Our Lady of Marija Bistrica Croatian Catholic Parish (14680 Deer Ridge Drive SE, T2J 5Y4, Calgary, AB). Interment to follow at Queens Park Cemetery (3219 4th Street NW, T2M 3A6, Calgary, AB). Following the Graveside Service, family and friends are invited to a Celebration of Branko’s Life at the Croatian Canadian Cultural Centre (3010 12th Street NE, T2E 7P7, Calgary, AB). Tributes and photo memories will be presented by the family, followed by lunch and refreshments.