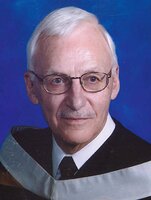 Keith was a member of the Hillhurst United Church and Wild Rose United Church, as well as a founder of the Learning Disabilities Association of Alberta. He accomplished much throughout his life and was particularly proud of his graduate degree in German and his ARCT for piano. Keith loved music, travel, and the outdoors. He was a talented pianist, an enthusiastic cyclist, and a deeply spiritual person. Keith’s most memorable vacations were the years spent exploring Europe with his second wife, Christine. Keith’s favourite saying was the serenity prayer. He will be most remembered for his talkative nature and boundless curiosity.

Keith is survived by his daughter and son-in-law, Dani and Mario Guido of Calgary, AB; his son and daughter-in-law, Robert and Connie Fewster of Calgary, AB; his two sons, William Fewster of Nanaimo, BC, and Jeff Bell of Niagara Falls, ON; his three grandchildren, Kaila Fewster, Patrick Bell, and Bradley Bell; and his great-grandchild Paisley Bell. Keith is also survived by his brother Dell Fewster of Winnipeg, MB, his sister-in-law Doreen Fewster of Steinbach, MB; his brother-in-law Brad McCabe of Winnipeg, MB; as well as numerous nieces, nephews, cousins, and friends. Keith was predeceased by his second wife Christine, his first wife Mary, and his brothers, Glenn Fewster and Wendell Fewster.

A Memorial Service will be held at Hillhurst United Church, (1227 Kensington Close NW, Calgary, AB), on Thursday, September 22, 2022, at 1:00 p.m. Reception to follow in the rectory at the church. Family and friends who are unable to attend in person are invited to join Mr. Fewster’s service streamed live on the day of the service here. For those who are unable to view live, a recording of the service will be posted. Condolences, memories, and photos may also be shared and viewed here.

The family would like to thank the staff at Origins Spring Creek in Canmore, Dr. Michael Quinlan, and the wonderful nurses and staff of the Canmore Hospital.