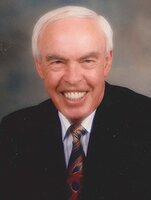 Gerald “Jerry” Stride, Beloved husband of the late Gloria Stride (nee Sohnle) of Calgary, AB, passed away on Sunday, October 30, 2022, at the age of 92 years. Jerry passed peacefully at the Foothills Hospital with his son Kelly Stride by his side.

Jerry and Gloria enjoyed spending summers at their cottage at Wabamun Lake and also enjoyed worldwide travel, making many friends along the way.

At Jerry’s request there will be no funeral or memorial service held, Jerry requested a fun family celebration of life at the cottage, date yet to be determined.