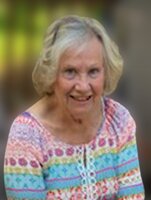 Daughter, sister, aunt, great-aunt, artist, sculptor and a late-in-life golfer, Jeannie was born in Calgary, the second daughter of her pre-deceased parents, Lorne and Isabel McLeod. She is survived by her sister Margie Gusella; her brother-in-law Richard Gusella; her niece Jennifer Gusella; her nephew Michael Gusella; Robbie and Evan Johannesen, her great nephews; Isabelle Gusella her new great-niece; and several cousins.

Jeannie was raised in Calgary, attended Viscount Bennett High School and graduated from the University of Calgary with a Bachelor’s degree in Fine Arts. Jeannie lived most of her life in Calgary but did live for some time in both Vancouver, B.C. and Honolulu, Hawaii. She held various administrative positions in the business world during her career and in later life, maintained an independent lifestyle, becoming an accomplished sculptor, potter and water colourist.

Jeannie loved her family and participated fully in all celebrations – Christmas, Easter, Thanksgiving, Birthdays, special occasions, and dinners. She also attended many hockey games involving her nephews, and other special events for family members. They in turn were only too happy to celebrate with her.

A gentle soul, Jeannie was a loyal and steadfast friend and a wonderful sister and Aunt.  She quietly went about her life with dignity and empathy for others.  Jeannie passed away suddenly following a brief hospitalization.  She will be sorely missed.

A Funeral Service will be held at McInnis & Holloway (Park Memorial, 5008 Elbow Drive SW, Calgary, AB) on Friday, November 18, 2022 at 2:00 p.m. Reception to follow in the Hospitality Centre at the Funeral Home. Condolences, memories, and photos can be shared and viewed here.