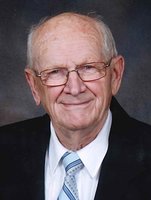 Alfred Kluck, beloved husband, father and grandfather, passed away on September 29, 2019 at the age of 88 years.

Al was born in Macklin, Saskatchewan.  He and his family lived on a farm in the Macklin area and then moved into the town of Macklin, across from the School.  When Al was 13 he would take time off school during harvest to help his Uncle by driving a tractor.

When Al was 16 the family moved to Penticton, B.C. where he attended Penticton High School.  Upon graduation, Al started with The Bank of Montreal.  In 1954 he married Jeannette Poulin and during the years they were married, lived in Vancouver, Kamloops, Vermilion, Calgary, Summerland, Cochrane and then lastly, Olds.

Over the years Al continued in the finance area, finishing his career with Cal-City Credit Union in Calgary where he was the General Manager.  He and Jeannette retired to Summerland, B.C.  In 1994 Al and Jeannette returned to Alberta and lived in Cochrane.

Al had an active social life and enjoyed curling, Bridge and other card games, as well as gardening and spending time on his yard.  Al played an active role in church activities; singing in the choir and participated on the finance committee.  He and Jeannette loved their family and enjoyed entertaining and had many dinners and celebrations over the years.  In later years Al was a volunteer at Olds Hospital, where he went regularly to feed residents in Long Term Care.

Al is survived by his sons and daughters-in-law, Greg and Elaine Clarke, and Martin and Debra Kluck all of Calgary, AB; two daughters and sons-in-law, Joanne and Brian Hegberg of Olds, AB and Angela and Kevin Bennett of Cochrane, AB; and his nine grandchildren, Kathryn, Greg Jr., Meghan, Anthony (AJ), Jacklyn, Alyssa, Nolan, Katelyn and Mark.  He is also survived by his three sisters, Frances, Marie and Theresa.  Al was predeceased by his son Mark in 1962 and wife Jeannette in 2007.

Funeral Services will be held at St. Stephen's Catholic Church (Olds, Alberta) on Wednesday, October 9, 2019 at 11:30 a.m.  Reception to follow in the Parish Hall. Condolences may be forwarded through www.McInnisandHolloway.com.