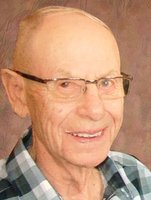 Ron Sirup, beloved husband of Joyce Sirup (nee Corsiatto) of Calgary, AB, passed away on Saturday, October 5, 2019 at the age of 89 years.

Ron was born in Bruno SK, to parents Louis and Euphemia Sirup on June 27, 1930. He moved out west to Calgary at an early age and began work in the construction industry. In 1963 he, along with his business partner, Ken Corsiatto, started their own company, Coral Construction Ltd. Ron enjoyed sports in general, especially curling, both as a spectator and avid participant. He was also a huge Flames and Stampeders fan.

Funeral Services will be held at McINNIS & HOLLOWAY (Crowfoot, 82 Crowfoot Circle NW, Calgary, AB) on Thursday, October 10, 2019 at 2:00 p.m. Reception to follow in the Hospitality Centre at the Funeral Home. Condolences may be forwarded through www.McInnisandHolloway.com. The family would like to extend their heartfelt gratitude for the excellent care and compassion given at the Foothills Medical Centre by Unit 30/31 and Unit 32.