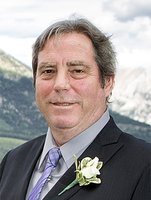 It is with immense grief that the family of Ray Rose, beloved husband of Sally Rose (nee Krejcik), announces his passing on Saturday, October 5, 2019 at the age of 63 years.  Ray passed away peacefully in the company of family he was visiting in Montreal.  Ray’s sharp wit and free-spirited attitude towards life will be dearly missed.

Ray was born in Montreal, QC and moved to Calgary, AB in 1985 in pursuit of his first career as a geophysicist, a good fit given his love of the outdoors. Ray enjoyed nothing more than to get away from the city and explore the beauty of nature, especially in the nearby Rocky Mountains.  Among his favourite activities were camping, road trips with his family, and baking in the sun at the lake.  The family cottage on Lac Quenouille in the Laurentians of Quebec was particularly dear to his heart.

At home, Ray spent most of his free time nurturing his yard and garden, and working on various handyman projects, all with a beer in hand. He was also an avid coin and rock collector. Ray really enjoyed his time with family and friends, playing cards and board games.  His dedication and versatility were also reflected in his professional life, which later spanned a fifteen-year career with the Canada Revenue Agency.

Ray is also survived by his nieces, Jesserae Cyr, Shey Cyr, and Juliette Rose; his nephew, Shawn Rose; his aunts, Roma Van Tassell and Gwen MacKay; his lifelong and dearest friend, Jean Beaudet; and numerous cousins and other friends.  He will also be lovingly remembered by his dogs, Aero, Hooter, Mango, and Gerry.

Ray is predeceased by his father, Raymond Francis Rose; his father-in-law, Stanislav Krejcik; his brother-in-law, Ian Krejcik; and his aunts, Joan, Bernice, Helen, Angela, and Liliane.

A private family gathering will be held at a later date. Condolences may be forwarded through www.McInnisandHolloway.com.