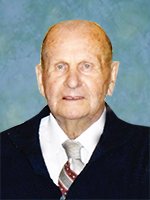 1919 – Moose Jaw, SK 2013 – Calgary, AB William “Bill” Peter Johanson passed away at Foothills Hospital on Tuesday, May 14, 2013 at the age of 93 years. Bill was born in Moose Jaw, SK. He served his country in England and France from 1940 to 1945. William will be missed by his son Dave; daughter Barb; daughter-in-law Jenny; and grandchildren, Melinda, Henry, Kendra and Jessie. He was predeceased by his loving wife Edith. Thank you to all the staff at the Foothills Hospital Ward 62 for their support. In keeping with Bill’s wishes, the family will celebrate his life privately. Forward condolences through www.mcinnisandholloway.com. In living memory of Bill Johanson, a tree will be planted at Fish Creek Provincial Park by McINNIS & HOLLOWAY FUNERAL HOMES, Fish Creek Chapel, 14441 BANNISTER ROAD S.E. Telephone: (403) 256-9575.