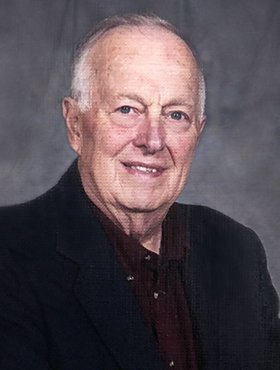 George Huber, beloved husband of Joyce Huber (nee Soloski) of Calgary, AB, passed away peacefully surrounded by members of his family after a long battle with Idiopathic Pulmonary Fibrosis, on Monday, November 4, 2019 at the age of 82 years. Our loving husband, father, grandfather, brother, uncle and friend was a fighter who never gave up until his last breath.

George was born in Saskatoon on June 9, 1937 as the eldest of seven children of Frank and Alma Huber. Frank was born in Passau, Germany and immigrated to Humbolt, SK in 1929. Alma was born in Steinbach, MB and moved to Saskatoon during her teenage years where she met Frank. At the tender age of three months, George and his young parents moved to Victoria Park in Calgary to start their new life. George was educated in Calgary, including St. Mary’s Boys High School where he pursued his passion for football playing offence as a prolific fullback and defence as a bruising linebacker.

In 1959, George met the love of his life, Joyce Soloski, through the Catholic Youth Organization. Joyce initially played hard to get but George’s relentless determination and charm soon won her over. During their two-and-a-half-year courtship, George attended SAIT and obtained his Electronic Technician’s Certificate. On June 24, 1961, they were married at Holy Name Church and started their life together residing at Joyce’s parents’ home in the southwest Calgary community of Glengarry. George and Joyce purchased their first and only home nearby in Killarney at 34th Street S.W. in June 1963 which would serve as homestead for their future family and the focal point for numerous family events during future decades. The Hubers arrived at their new home with their six-month-old first-born son, Glenn and welcomed their second-born son James five months later. Their third son Matthew arrived thirteen months later in 1964 followed by the birth of their fourth son Philip in 1969. In December 1972, they were blessed with the birth of their daughter Cynthia.

While assisting Joyce with raising their growing family, George diligently worked his way up to the role of Service Manager and became a co-owner of a successful local TV sales and service company during the next twenty-three years. In January 1984, at forty-seven years of age, George established Professional Video and T.V. Ltd., subsequently partnered with his son James for seven years and successfully operated the business until his retirement at sixty-five years of age.

Throughout his busy career and family life, George always found time to spend special moments with his loving wife, Joyce, including regular Saturday night date nights and multiple trips to Hawaii, their favorite destination getaway. They also travelled to many other destinations including Spain, Florida, Mexico, New York, Victoria, Vernon, Saskatchewan and many areas in Germany.

George was a dedicated husband, father, grandfather and friend as well as a role model to many people who knew him. He was viewed as a leader in his community and a respected coach to many aspiring young hockey players which became life-long friends. He was a man of integrity with a deep faith in God and an exceptional work ethic. As a mentor to his children, he taught them how to love and honor their spouses and children while respecting others. While George was infinitely proud and supportive of his children, he also took great pride in developing a special relationship with each of his twelve grandchildren, Tyler, Reed, Jenna, Bennett, Carter, Grace, Olivia, Zenon, Isabella, Noel-John, Keenan and Christian.

George will forever be missed and fondly remembered by all.

George was predeceased by his parents Frank and Alma Huber, his sister Shirley Michener, and Joyce’s parents Joseph and Anna Soloski.

Relatives and friends are invited to Prayers at McINNIS & HOLLOWAY (Chapel of the Bells, 2720 Centre Street North Calgary, AB) on Thursday, November 7, 2019 at 7:30 p.m.

Funeral Mass will be celebrated at Holy Name Catholic Church (2223 – 34th Street S.W., Calgary, AB) on Friday, November 8, 2019 at 11:00 a.m. Reception and Tributes to follow in the Parish Hall. Condolences may be forwarded through www.McInnisandHolloway.com.