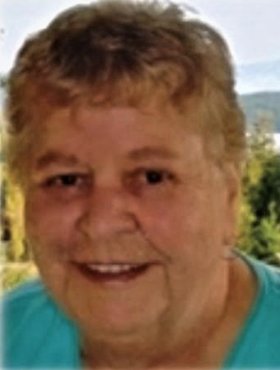 Virginia Bromley of Calgary, AB passed away at  home on Thursday, November 7, 2019 at the age of 77 years.

Ginny was born in Calgary, Alberta, Canada on April 17, 1942. She graduated from the Calgary General Hospital School of Nursing with a degree in Nursing. Ginny married Herb Bromley in August of 1963. She was a member of the Scouts Canada and was a Cub Leader in Airdrie, AB for ten years. Ginny loved to travel and shared many memorable trips with her family. In recent years she enjoyed “Cruising” and accompanying her grandson to theme parks like Disneyland and Lego land.  Ginny fondly referred to her time in Australia as the “Trip of a Lifetime” and enjoyed her adventures “Down Under”.

Ginny is survived by her son and daughter-in-law, Rob and Sue; daughter and son-in-law, Debbie and Shane; and her grandson Owen; all of Calgary, AB. She is also survived by her sister June Cook of Vancouver Island, as well as numerous nieces, nephews, cousins, and friends. Ginny was predeceased by husband Herb in 2007, son Michael in 1979, brother Gerald Eggen, and parents Ruth and Fred Eggen.

Share Your Memory of
Virginia Irene
Upload Your Memory View All Memories
Be the first to upload a memory!
Share A Memory
Send Flowers