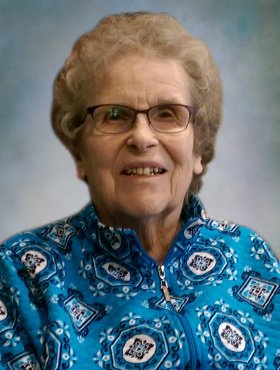 Hely was born to Finnish immigrants in northern Ontario.  Her father was a section foreman for the Algoma Central Railway.  After high school in Sault Ste. Marie, Hely became a nurse.  She trained at the Plummer Memorial Hospital, where her classmates became lifelong friends. Hely married Mark Innes, who was an RCAF radio officer at the time, in 1954.  Mark was ordained a Lutheran minister in 1960. They served parishes in Ontario and Nova Scotia.  Everywhere they lived Hely touched lives and made many friends.  After their retirement, Mark and Hely moved to Calgary to be close to family.  Hely lived as a widow for nine years.  She will be remembered as a warm and gracious lady.

Funeral Services will be held at Hope Lutheran Church (3527 Boulton Road N.W., Calgary, AB) on Tuesday, November 12, 2019 at 10:30 a.m.  Reception to follow at the Church. Graveside Service to follow at Eden Brook Memorial Gardens. Condolences may be forwarded through www.McInnisandHolloway.com. In lieu of flowers, memorial tributes may be made directly to Canadian Lutheran World Relief Fund, Telephone: 1-800-661-2597, www.clwr.org/donate.

The family wishes to thank all the staff of Bethany Harvest Hills for the excellent care Hely received as their resident.

Share Your Memory of
Hely
Upload Your Memory View All Memories
Be the first to upload a memory!
Share A Memory
Send Flowers