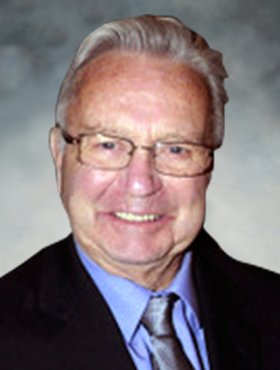 Stanley Thompson beloved husband of Mary Thompson of Calgary, AB, passed away peacefully on Monday, November 11, 2019 at the age of 87 years at the Dulcina Hospice.

Stan was born in Elnora, AB. When he was sixteen, he moved to Banff to play hockey. Stan then moved to Calgary in 1952 where he settled, met Mary, and raised his family.

After thirty-six years at Weston Bakeries, Stan retired in January of 1988. In retirement, he continued to enjoy golf, curling and lawn bowling; he also developed a love of cruising and happily went anywhere a cruise ship sailed. As Stan’s health waned, he developed a special relationship with his great-grandson, Malcolm and delighted in Malcolm’s visits and antics.

Stan will be lovingly remembered by his wife of sixty-three years, Mary, and by his children, Brian (Jeanette), Linda (Archie) and Garry (Leslie). Stan is also survived by six grandchildren, Erik, Katrine (Landon), Corynn (Chad), Megan, Shawn and Nicholas; his two great-grandchildren, Malcolm and Waverly; his brother Larry (Marj) Thompson, and by numerous nieces, nephews and extended family members. Stan was predeceased by his brothers, William, Gerald, and Jon; and by his sister Marion Walker.

A Celebration of Life will be held in the Hospitality Centre at McINNIS & HOLLOWAY (Chapel of the Bells, 2720 Centre Street North, Calgary, AB), on Saturday, November 16, 2019 at 10:30 a.m.  If friends so desire, memorial tributes may be made directly to the Alberta Children’s Hospital Foundation, 28 Oki Drive NW, Calgary, AB  T3B 6A8, Telephone: (403) 955.8818. www.childrenshospital.ab.ca. Condolences may be forwarded through www.McInnisandHolloway.com. The family would like to extend their gratitude to the staff and volunteers at Dulcina Hospice for the kind and gentle care Stan received.

Share Your Memory of
Stanley (Stan) Malcolm
Upload Your Memory View All Memories
Be the first to upload a memory!
Share A Memory
Send Flowers