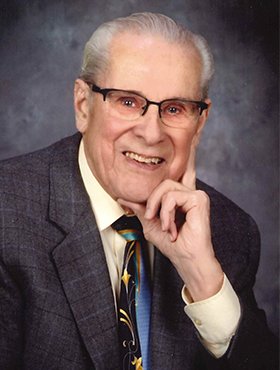 Frank was ordained to the gospel ministry in November, 1952 and served in Pennsylvania, Michigan, Illinois and Oregon before coming to Calgary in 1974.  In Canada he served in Calgary and Banff, ministering to the Banff community for fourteen wonderful years. His ministerial career spanned sixty-two continuous years and included several different types of ministry.  These were in Hospice Spritual Care, Bethany Care Society, and interim ministries in Calgary, Regina, Winnipeg and Lethbridge. Dort was his faithful, loving and creative partner until her death in 2003, as is Sheila after their marriage in 2006. Frank’s ministry was marked by excellent and erudite preaching and creative attempts to make the Christian gospel relevant to the world in which he lived.  Over the years, he wrote material ranging from Bible textbooks for high school students to Church School lessons and radio shows. Counselling became an important part of his ministry and he was deeply involved in the broader work of the church. Frank was a beloved and cherished husband, father, brother, pastor and friend.  His presence with us is greatly missed, and we look forward in faith to being reunited with him one day.

Frank will be missed by his wife Sheila Kirkland, his son Jim and wife Diane, daughter Marybeth and husband Cor, and daughter Sue. Frank will also be missed by his grandchildren, Alicia (James) and Cyndi (Justin) Breisch, Rachel Luke, Christopher (Alexi), Alanna (Ben) and Nathan deGruyter, Joshua and Erin Alden; and his six great grandchildren.  Frank was predeceased by his first wife Dort and his eldest son Francis David III.

Funeral Services will be held at St. Andrew’s Presbyterian Church (703 Heritage Drive S.W., Calgary, AB) on Saturday, January 11, 2020 at 2:00 p.m. Condolences, memories and photos may be shared and viewed on Frank’s obituary at www.McInnisandHolloway.com.

Share Your Memory of
The Rev. Dr. Frank
Upload Your Memory View All Memories
Be the first to upload a memory!
Share A Memory
Send Flowers