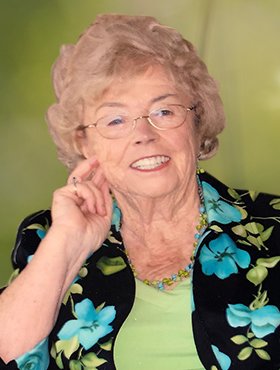 Elizabeth (Betty) Blacklaws of Calgary, AB, beloved wife of the late Douglas Blacklaws, passed away peacefully on Thursday, January 9, 2020 at the age of 93 years.

Betty was born in Calgary as the youngest of eight children to Elizabeth and William Morrison. Betty loved her two sisters and five protective big brothers. She was also fortunate to have her sisters-in-law as some of her closest friends later in life.

At the end of WWII, Betty met and married the only love of her life, Doug Blacklaws. Together they were the proud parents of three boys – Edward (Ted), Lawrence (Larry) and Richard (Rick). Their love expanded over six decades together, where they enjoyed travelling around the world, walks along the Bow River and time with their beloved family.

Betty proudly worked for the Calgary Herald’s advertising department, and had a long lasting career at the department store, Eaton’s. She will fondly be remembered for her freezer full of home baked treats, her ability to always recall every family member’s birthday or anniversary and her resilience through life’s most challenging calls.

Betty is survived by her son Rick, and his wife Carol and their children Brydon (Myta), Jake (Ashley) and Caitlin (Ben) of White Rock, BC; her daughter-in-law Vicky (Ted) and their children Ligaya (Martin) and Rina (Phiron) of Calgary; along with her six great-grandchildren, Mira, Fraser, Dominic, Nolan, Ethan and Logan. She is also survived by her sister-in-law, Ellen Clark (Archie) of Edmonton; as well as several nieces and nephews. She was predeceased by her sons, Ted and Larry, and all sisters, brothers and their spouses. Special thanks to the care staff at Cedars Villa Extendicare.

Funeral Services will be held at McINNIS & HOLLOWAY (Crowfoot, 82 Crowfoot Circle NW, Calgary, AB), on Sunday, January 12, 2020 at 2:00 p.m. Reception to follow in the Hospitality Centre at the Funeral Home. Condolences, memories and photos may be shared and viewed on Betty’s obituary at www.McInnisandHolloway.com.

Share Your Memory of
Elizabeth (Betty)
Upload Your Memory View All Memories
Be the first to upload a memory!
Share A Memory
Send Flowers