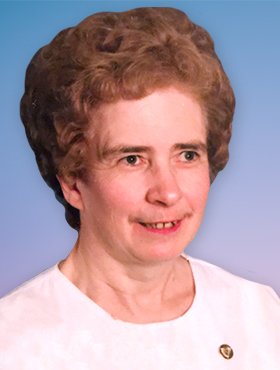 Shirley Johnson, of Calgary, went to be with the Lord on Friday, January 10, 2020 with her family by her side at the age of 84 years.

Shirley was born on February 12, 1935 in Gleichen, AB where she spent most of her youth, where her father was the Reverend of the Anglican Church and principal of the local school.  Shirley’s father passed away when she was twelve, which led to her family moving to Calgary.  Shirley was a number’s person and worked in accounting and ministry for most of her career.  This gave her the opportunity to  travel on missions to many countries including Thailand, China, New Zealand, Philippines, Indonesia, Hong Kong, Malaysia, and ended her time at the University of the Nations in Kona, Hawaii.  She worked and volunteered with Samaritan’s Purse, Billy Graham International and Youth With A Mission.  Shirley accomplished much through her life and was particularly proud of her children, grandchildren, and her ministry work. She was an active member of First Assembly Church.  Shirley’s favourite scripture verse was Philippians 4:8 – “Finally, brethren, whatsoever things are true, whatsoever things are honest, whatsoever things are just, whatsoever things are pure, whatsoever things are lovely, whatsoever things are of good report; if there be any virtue, and if there be any praise, think on these things.” She will be most remembered for her care and love for her three children who she poured her life into.

Shirley is survived by two sons, Matthew and Andrew and a daughter and son-in-law, Michelle and Patrick Ward; five grandchildren, Chelsey and Cass Lynds, Luke, Andy, and Tim Johnson; two step-grandchildren, Lia (Robert) Depencier and their daughter Anelle and Robert Ward.  She will also be remembered by many other relatives and friends. She was predeceased by her two brothers, Doc and Jack and her sister, Marg.

Funeral Services will be held at First Alliance Church (12345 – 40th Street S.E., Calgary, AB) on Friday, January 17, 2020 at 1:00 p.m. Condolences, memories and photos may be shared and viewed on Shirley’s obituary at www.McInnisandHolloway.com.

Services for Shirley Johnson
There are no events scheduled. You can still show your support by sending flowers directly to the family, or planting a memorial tree in memory of Shirley Johnson.
Visit the Tribute Store