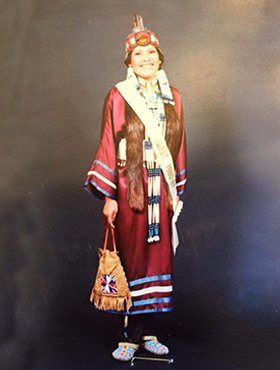 Caralee Heavenfire, beloved wife of Gordon MacDonald of Calgary, AB, passed away on Saturday, February 1, 2020 at the age of 56 years.

Caralee attended high school at E.P. Scarlett, during which time she was able to visit Japan. She also attended modeling school. She graduated with a Bachelor of Science from Mount Royal University. Over the years she was employed in administration at Redwood Meadows, Tsuut'ina Property Management, Tsuut'ina Education, and Tsuut'ina Health Centre. Her grandfather, the late David Onespot, named her Peace Pipe Woman, and when she was a Sarcee Princess (from 1980 – 1982), she became Shining Star. Caralee volunteered and was a big support for various sports teams such as the Tsuut’ina Royals Basketball team and was a co-founder of the Tsuut’ina Charity Golf Tournament. She loved spending time with her grandchildren and great-grandchild. Her most memorable vacation was in 2015, at the age of 52, when she went to Maui. She always had a special place in the hearts of those she was connected to. She loved her family and enjoyed being with them. Caralee will be most remembered for her kindness.

Wake Services will be held at the residence of Nicholas Heavenfire, Tsuut’ina Nation, AB, on Friday, February 7, 2020 at 3:00 p.m.

A Celebration of Caralee’s Life will be held at Bullhead Hall on Saturday, February 8, 2020, at 11:00 a.m. Graveside Service to follow at Tsuut’ina Cemetery (Tsuut’ina Nation, AB). A Traditional Feast will be held at Bullhead Hall (Tsuut’ina Nation, AB) immediately following the graveside. Condolences, memories and photos may be shared and viewed on Caralee’s obituary at www.McInnisandHolloway.com. The family would like to thank Tsuut'ina Chief and Council, Tsuut'ina Health Centre, the Staff from Unit 78 at the South Health Campus.

Share Your Memory of
Caralee
Upload Your Memory View All Memories
Be the first to upload a memory!
Share A Memory
Send Flowers