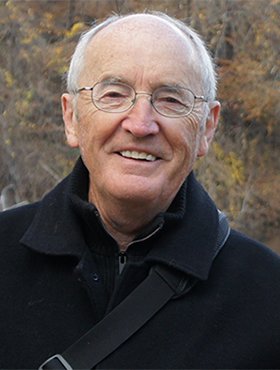 With sadness we announce the passing of Jim (James Allen) Dabbs on February 13, 2020.

Jim was born in Edmonton, AB, but raised in Camrose. He attended the University of Alberta, graduating in 1965 with a Bachelor of Commerce. His career began with Bank of Montreal, to Amoco Petroleum, and then to Siebens Oil & Gas. In the late 70s Jim formed Geocrude Energy Inc. which was sold in 1986. Consultation in Oil & Gas kept him busy until 1994 when he officially retired.

Jim and Marny were adventurers in their RV in which they crossed Canada and visited most of the fifty states, often driving to Arizona via the east coast. Jim looked forward to family vacations when he had all his family in the same place at the same time. The last few summers were spent at the cabin in the Shuswap where he would sit for hours admiring the view of the lake.

Jim enjoyed his golf at Silver Springs Golf Club, Calgary. Joining the club in 1973 this would become a place where both he and Marny found many lifelong friends. In 2000, they bought their house in Montesa, Gold Canyon, AZ, where they have spent their winters for the past twenty years, golfing and enjoying desert life. An active member of the Calgary Winter Club, he enjoyed many activities and was a two-time past president of the club in 1980-81 and 1982-83. Jim also loved his barbershop and was a member of the Western Hospitality Singers prior to spending winters down south.

He is survived by Marny (Margaret Anne) Dabbs, his beloved wife of fifty-four years; his daughters, Andrea Jabour (Dan) of Coquitlam, BC, Erin Verwey (James) of Calgary, AB; and his cherished grandchildren, Vincent, Nathan, and Georgia. Jim is also survived by his brothers, Dennis (JoAnn) Dabbs and Geoffrey Dabbs of Vancouver, BC. Jim was predeceased by his parents, James Leonard Dabbs and Marjorie Dabbs.

A private family service will be held in Calgary with a celebration to be planned at a future date.

If friends so desire, memorial tributes may be made directly to Eating Stone Orphanage near Nairobi, Kenya, orphanshome.ca, an organization run by a personal friend of Jim and Marny. They have supported this organization over the years as it was important to Jim, who loved his family dearly, to give back to these children who had none. Condolences, memories and photos may be shared and viewed on Jim’s obituary at www.McInnisandHolloway.com.

Our thanks to Dr. Teresa M. Kieser and all the staff on Unit 94 for their amazing and thoughtful care.