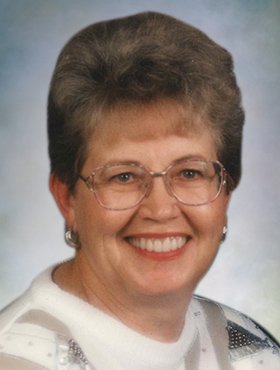 Alice Doreen Bates beloved wife of the late James Bates, mother, sister, and grandmother, passed away on Wednesday, February 12, 2020 at her home at Evanston Grand in Calgary at the age of 83 years.

She was born in the town of Sylvan Lake on March 8, 1936 to Fred and Hilja Takkinen, and raised in the Eckville area.  She had very fond memories of growing up on the farm with her younger brother Lawrence, and her younger sister Karen.

Alice worked in Calgary briefly at a bank right after high school, then went to Normal School at the University of Alberta in the two year program to graduate as a teacher.  Her first job was teaching grade 2 in Acme School.  This is where she met a young Jim Bates, who she married on December 27th 1958.

Soon they bought their own farm west of Acme where they remained until they retired, raising four children and keeping active in the community.  Alice, like most women on the farm, always grew a large garden, and spent many hours canning, freezing, baking, and cooking three meals a day.

In later years, Alice and Jim liked to spend the winters in Palm Springs, where Jim golfed and Alice painted beautiful landscapes and flowers that her family still enjoy.  Alice was a keen genealogist and traced the family back on both the Bates and Takkinen sides. Jim was her best friend and they were happily married for fifty-seven years, until his passing in 2016.

Alice’s family would like to extend a heartfelt thanks to the caring staff at Evanston Grand, and to Angela and Jessica who also provided friendship and support.

Funeral Services will be held at McINNIS & HOLLOWAY (Crowfoot, 82 Crowfoot Circle NW, Calgary, AB), on Friday, February 21, 2020 at 2:00 p.m.  Reception to follow in the Hospitality Centre at the Funeral Home. Condolences, memories and photos may be shared and viewed on Alice’s obituary at www.McInnisandHolloway.com.

Share Your Memory of
Alice
Upload Your Memory View All Memories
Be the first to upload a memory!
Share A Memory
Send Flowers