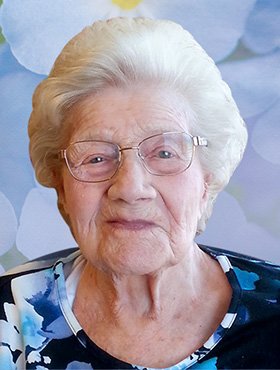 Jane Davis passed away peacefully on Friday, February 14, 2020 after celebrating 101 years of life.

Jane was born and raised in Pernis, the Netherlands, where she met her future husband, Frans.  After a long courtship, they married in 1946.  In April of 1953, Jane and Frans took their children to Canada aboard the S.S. Groote Beer and settled in Calgary.  They built a home in Bowness and raised their four children there.

Jane loved cooking, sewing, gardening, handcrafts and singing.  She was always baking or making meals for her family.  Jane had a love for plants and flowers.  She was always checking the soil with her fingers to make sure that the plants had enough moisture. Her greatest passion was singing.  As a youth and young adult she would sing in the town and church choirs. In Calgary she joined the Calgary Choral Society and always sang in the church choir. Jane could often be found listening to or singing hymns.  Her faith and love for the Lord was genuine and deep.  After her husband passed away in 1999, Jane continued to live life to the fullest by gardening, travelling and spending time with family.

Jane continued to live in her Bowness home for fifty-six years. In 2013, she reluctantly moved into an assisted living facility after breaking her hip while gardening in her backyard. The family is thankful to the staff of Bow View Manor for their compassionate care of Jane.

A Memorial Service will be held at Dalhousie Church (5511 Baroc Road N.W., Calgary, AB) on  Saturday, February 22, 2020 at 1:00 p.m. Reception to follow at the church. Condolences, memories and photos may be shared and viewed on Jane’s obituary at www.McInnisandHolloway.com.

Share Your Memory of
Adriaantje (Jane)
Upload Your Memory View All Memories
Be the first to upload a memory!
Share A Memory
Send Flowers