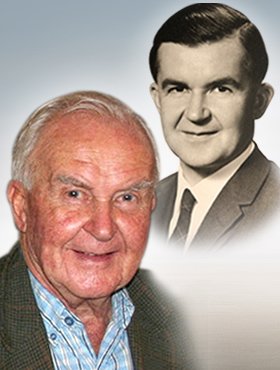 Gordon Harris Jones was born to Margaret & Bertram Jones in Northampton, England on June 2, 1927. He was educated in Birmingham and received his doctorate in Geology from the University of Birmingham in 1956.  He was married to Sylvia Frost in 1955: they had four children, thirteen grandchildren, and seven great grandchildren.  Dad was an amazing, well read and highly intelligent man who worked with many companies, and travelled the world.  He was the world's foremost expert in Arctic Oil & Gas Exploration.

Gordon spent his early years in England, then went to Uruguay in 1950.  Here, he was the only geologist for the Government of Uruguay, but it was also the place where he met Mom in 1954.  Gordon & Sylvia did missionary work in Uruguay, Dad was there with the Plymouth Brethren and Mom taught at a Methodist School.  They met at a Gospel Camp in Uruguay. They married and eventually moved to New Jersey in 1958 and Calgary in 1959.

He was the Chief Geologist/Manager for Hunting Exploration and Services in South America (1950-1958) and Canada (1958-59), then became head of the Geology Department and Director for Sproule and Associates in Calgary (1960-1968) and he was one of the founders and  Corporate Secretary for Panarctic Oils Limited (1966-67). He was one of the original executives for Petro-Canada in 1975, and then went on to be the President and Director of Global Marine Arctic Ltd. (1968-76), Technical Coordinator and other executive positions for Petro-Canada (1976-1978).  He decided to start his own company, Jones Frontier Advisors Ltd (1979), and he became President of Alconsult International Ltd. (1986). He was also Executive Director of the Arctic Petroleum Operators Association and the Eastcoast Petroleum Operators Association. During these years, Gordon spent the winters involved with the Oilmen's Curling and Bowling Leagues, as well as several committees at church. He was even the president of the Home and School at Rosedale Elementary. He joined the Calgary Zoo shortly after arriving in Calgary, working as the Director of Education, and later, a Trustee and a Senator; he was instrumental in the planning and fundraising for the Dinosaur Park.  Many summers, he would spend three to four months exploring the Arctic Islands. He was a voracious reader and writer. He had thousands of books in his collection, many articles, reports, and books written by Gordon, in Spanish or English. He built a cabin in Bragg Creek in the early 1960’s and then built a large cedar log cabin in Lac des Arcs in 1969. In the 70’s, he took up golfing, cross-country skiing and timesharing. Eventually, they sold their place in Lac des Arcs and bought a second home in Edgewater, BC. Gordon and Sylvia travelled every continent and almost one hundred twenty countries in their travels. Gordon studied and researched every country before embarking on yet another adventure which he shared with travelogues, lectures and letters. We will miss Dad so much. He loved sharing time with his family. He couldn’t turn down a card game whether it was bridge, crib or canasta. After Mom passed away, Dad gradually lost his vision and relied primarily on audio books and visits from his family.

We are extremely grateful to those who visited, phoned or kept in touch with Dad in any way. To the caregivers, thank you for taking the time to treat Dad with kindness, patience, and dignity. It was very much appreciated.

We will hold a celebration of Gordon’s life at a later date. Condolences, memories and photos may be shared and viewed on Gordon’s obituary at www.McInnisandHolloway.com.