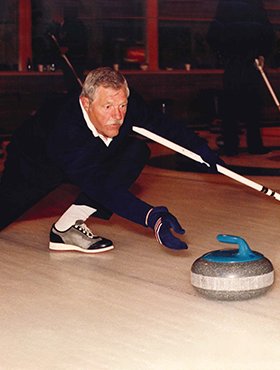 No Services Scheduled at this time

You can still show your support by donating to the Heart and Stroke Foundation of Canada www.heartandstroke.ca

It is with great sadness and heavy hearts we share the news that our beloved Husband, Dad and Papa, Wilmur Herbert Sanders (Willy) passed away on Tuesday, April 7, 2020 at the age of 86 years.

Willy was born on January 7, 1934, on the family farm in Hussar, AB to Lotti and Herbert Sanders. Willy grew up in Hussar and spent most of his early years working with his Dad on the family farm.  Later, he worked for other farmers, local businesses and on oil rigs.

He married his sweetheart and best friend, Zella Williams, in 1960 and began working for the Pioneer Grain Company.  In 1969, they moved their young family from Youngstown, AB to Calgary where Willy was employed by Calgary Transit, working as a bus driver and driver trainer until his retirement in 1999.

Willy’s life centered around his wife, sons, grandsons, and extended family and friends.  He coached baseball and hockey, and was a life-long participant in sports, with curling and golf being his hands down favorite.  Nothing gave Willy more joy than watching his grandchildren play hockey, baseball, soccer and basketball, and letting them win at checkers but never at golf.

Willy had a larger than life personality, with a hearty laugh and a welcoming smile.  He had a zest for life that few folks will match.  He loved gathering with family and friends, telling jokes, socializing, and making new memories while celebrating those of the past.  Though his physical presence has left the earth, the deep impact he made on the lives of those who surrounded him will never vanish.   He will live forever in our hearts.

Willy is survived by his loving wife, Zella; his two sons, Dwight (Tracy) and Brent (Joan); and his six devoted grandchildren, Nick and Matthew  of Calgary and Kieran, Liam, Aidan and Ethan  of Seattle.  Willy was a caring brother to his sisters Eileen, Helen and Shirley, and brother-in-law to Bev, Clarke, Helen and Larry, Marie, Phyllis and Stewart.  Willy was predeceased by his parents, infant brothers, Robert and Carl; brothers, George and Norm; sister Elsie; and brothers-in-law, Brian, Keith and Merlin.

Willy will be laid to rest in the Hussar cemetery.  A celebration of his life will be announced at a later date when we can all gather in person.

Condolences, memories and photos may be shared and viewed on Willy’s obituary at www.McInnisandHolloway.com.

Share Your Memory of
Wilmur
Upload Your Memory View All Memories
Be the first to upload a memory!
Share A Memory