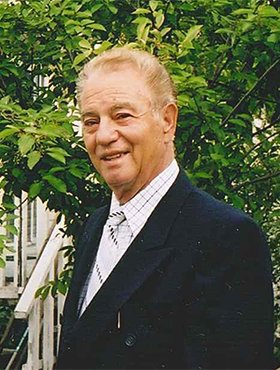 Carmine Acierno, dearly loved husband of Nicolina Acierno (nee Galetta) of Calgary, AB, passed away on Sunday, April 12, 2020, at the age of 87 years.

Carmine was born in Petruro di Forino, Avellino, Italy, on June 1, 1932. On May 28, 1955, he married the love of his life, Nicolina. Shortly after, they moved to Canada to start their wonderful life as husband and wife. Carmine was a gentle and kind man, who worked hard from a young age to provide for his family. Retiring from his job at the hospital early on, gave him the ability to devote time to his family and allowed him to work on what he enjoyed most, his garden. When he wasn’t in the garden, he would be playing a weekly game of Scala Quaranta with his closest friends, whom he considered family. Along with spending endless weekends with the people he cared for the most, together, they also enjoyed many holidays, like visiting places such as Italy, Mexico, Hawaii and Las Vegas, creating memories to last a lifetime. Carmine will be remembered most for his dedication to his family and ensuring everyone had what they needed. He took great pride in everything he did, and his legacy will forever live on in the hearts of all who knew him.

Besides his loving wife of sixty-four years, Nicolina, Carmine is survived by his two daughters, Diana (predeceased by Alessandro) and Kristina-Marie (Carlo); and his four grandchildren, Sabrina, Loredana (Luciano), Monica, and Amanda. He will also be forever remembered as the best Bisnonno in the world by his five great-grandchildren, Francesco, Alessandro, Isabella, Marcello, and Lorenzo. He is also survived by numerous nieces, nephews, cousins, and friends both in Canada and Italy.

Due to circumstances beyond our control, there will be no public viewing, mass, or funeral service. Condolences, memories, and photos may be shared and viewed on Carmine’s obituary at www.McInnisandHolloway.com.

Share Your Memory of
Carmine
Upload Your Memory View All Memories
Be the first to upload a memory!
Share A Memory
Send Flowers