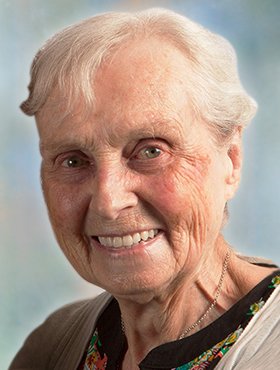 In lieu of flowers, if you wish to make a memorial tribute to commemorate Joan’s life, her favourite charity was Médecins Sans Frontières / Doctors without Borders www.doctorswithoutborders.ca, 720 Spandina Avenue, Suite 402,Toronto, ON M5S 2T9 Telephone: 1-800-982-7903.

Joan Riches, born and raised in New Liskeard, ON, most recently of Calgary, AB, died peacefully and loved, with her eldest daughter by her side, on Monday, May 4, 2020 at the age of 83 years. She was lovingly cared for at the Foothills Hospital, Intensive Palliative Care Unit.

Joan was the first born of many grandchildren and nurtured strong relationships with her extended family throughout her life. She had deep connections with her Fowler and Lavery families, many of whom lived close by while she was growing up. She had many happy times at the Fowler family homestead on Amherst Island. Her family also had a cottage on Twin Lakes, and this was a favourite family gathering place. This legacy continued with her children and grandchildren.

Joan met Peter in the Church of St. Mary Magdalene Anglican choir in Toronto, and they married in 1956 in New Liskeard, ON. Together, they maintained a strong and loving relationship for fifty-seven years until Peter died in 2013. Peter’s engineering career provided the opportunity for relocation across the Americas. Their four children were born in Toronto and through their life together, Peter and Joan also  lived in Pittsburgh, Montreal, Venezuela, Nevada, Vancouver, High River, and Joan spent her final years in Calgary. Her granddaughter Sian and cousin Laurie were her close family connections in Calgary.

Marrying in the 1950’s meant that Joan interrupted her university studies at the University of Toronto and stayed at home with her children until they were all in school. She then became involved in many community and volunteer organizations. She was a founding member of the West Island Women’s Centre, a place that her daughter Carol and grandchildren Keri, Sian and Jenna enjoyed years later. She was a school commissioner with the Lakeshore School Board in Montreal’s West Island and then president of the Quebec Association of Protestant School Boards. Joan returned to university and completed her Occupational Therapy degree at the University of Alberta, graduating in 1993. Joan’s expertise in, and passion for, occupational therapy (Allen Cognitive Disabilities Model) continued throughout her life.

Joan and Peter together had a passion for community building and co-housing. Although the co-housing plans were not settled at the time of Peter’s death, Joan persevered and was a key member in establishing the Dragonstein co-living community. Joan embraced sustainable living long before it was a common practice and this extended from her own daily actions to Green Party membership. She was an active member of the Calgary Unitarians, which fulfilled her strong spirituality. Singing in choirs was a life-long passion of Joan’s (except for the forty years when she was not a choir member!). She was an active member of the Calgary Unitarians choir, which gave her such joy.

Joan was a creative thinker while still being grounded; she saw the big picture, the details, and the process connecting the two. She was not afraid of rolling up her sleeves to accomplish her goals. She understood and used the art of compromise in her dealings, but also had clear lines that she would not broach when they clashed with her fundamental values, especially regarding how people should be treated. She was a voracious reader, and never stopped learning, nor was she afraid of the unknown or where it might lead her. She was an addictive reader, often staying up all night to consume a novel. She had a remarkably elastic mind; open to challenging assumptions and traditional beliefs. She was a true believer in neuroplasticity and continued to exercise her brain up until the day of her stroke. At times, she was a person of extremes; she loved talking but also enjoyed silence. She was able to easily communicate complex thoughts in real time and enjoyed one on one time with her friends and family, especially over a cup of tea.

Joan lived an extraordinary life. She had a large and organic network of colleagues, friends and family, to whom she was loved and treasured. She will be deeply missed.

The entire family would like to thank Dr. Deena Hinshaw, Alberta's Chief Medical Officer of Health, who ensured that essential visitors were permitted one at a time in accordance with COVID-19 restrictions, so that Joan did not die alone.

A virtual service will be held at the end of May to celebrate Joan’s life. Please email remembering.joan.riches@gmail.com for date and time if you would like to attend. Condolences, memories and photos may be shared and viewed on Joan’s obituary at www.McInnisandHolloway.com.

In lieu of flowers, if you wish to make a memorial tribute to commemorate Joan’s life, her favourite charity was Médecins Sans Frontières / Doctors without Borders www.doctorswithoutborders.ca, 720 Spandina Avenue, Suite 402,Toronto, ON M5S 2T9 Telephone: 1-800-982-7903.

Because I Could not Stop for Death

Because I could not stop for Death—
He kindly stopped for me—
The Carriage held but just Ourselves—
And Immortality.

We slowly drove—He knew no haste
And I had put away
My labor and my leisure too,
For His Civility—

Or rather—He passed Us—
The Dews drew quivering and chill—
For only Gossamer, my Gown—
My Tippet—only Tulle—

Share Your Memory of
Joan
Upload Your Memory View All Memories
Be the first to upload a memory!