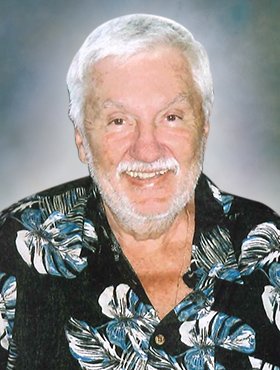 The close and loving family of Steve Takacs of Calgary, Alberta, wishes to announce our profound sadness of his passing on Monday, August 10, 2020, at the age of 83 years.

Steve was born in Drumheller, Alberta, on February 8, 1937 and raised until the age of sixteen in Newcastle, Alberta. His family relocated to East Coulee, Alberta, where he developed more lasting friendships in the Valley. Steve met his true love in the teenage years of their lives, Sandra (Sandy) (nee Berridge) and eventually they married on June 29, 1957 and celebrated their sixty-third wedding anniversary this year.

Steve attended Mount Royal College for two years, hoping for a career in the oil business. However he found his true calling in the insurance industry where he excelled in sales and won many awards for his accomplishments. Because of his sales abilities, Steve and Sandy were able to travel the world on conventions and extended trips. Towards the end of his career in insurance, Steve’s entrepreneurial spirit also allowed him to juggle successful endeavours and interests in many ventures, but particularly in the oil and gas industry.

Steve and Sandy upon retiring, spent nearly twenty years of warm winter weather fun in Mesa, Arizona, enjoying golf, fun happy hours, and developing new and special friendships while there. The family of Steve and Sandy also enjoyed the lifestyle their house in Arizona offered them. They said it was the ‘best all-inclusive holiday’ every year.

Throughout his life, Steve lived with a bigger than life personality, booming voice and laugh, integrity, humour, and great authenticity. Steve was so proud of his children, grandchildren and great grandchildren. Steve always enjoyed an engaging conversation in politics, and loved taunting many of us with his Republican antics.  Steve was a self-taught ‘Whiz’ in the stock market, and boasted of an unofficial citizenship in the USA. Steve will always be remembered for wearing one of his favoured Hawaiian shirts in the summer months, and plaid flannel in the winter months.

Steve is survived by his wife, Sandra Takacs; his daughter Deb Turcott; his youngest son Jeff Takacs and his wife, Thérèse Takacs (nee MacNeil); four grandchildren, Robyn Turcott (Richard McClaughlin), Joey Turcott, Christian Takacs, and Leah Takacs; as well as his great-grandsons, Conlan and Eamonn McLaughlin. He is also survived by his first daughters-in-law, Juli McManus (who was married to Todd Takacs), and Renee Takacs (nee Walker), mother of Christian and Leah; and his special cousin from Hungary, Alex (Sandor) Galdi. Steve is also survived by a very large extended family of brothers and sisters-in-law, nieces and nephews.

Steve was predeceased by his father Steve Takacs; his mother and step-father, Anna and Paul Lesko; and his eldest son Todd Steven Takacs, who passed away on April 14, 1995.

He will be deeply missed by all who knew him. Steve was truly ‘one of a kind’ and the impression he made on all of us who knew and loved him, will live on within us all - forever. They truly broke the mold when Steve Takacs was born.

A Private Family Graveside Service will be held, and in the months to come, we hope to celebrate his life with an informal get-together.

In lieu of flowers, memorial tributes in Steve’s honour may be made directly to the charity of donor’s choice. Condolences, memories and photos may be shared and viewed on Steve’s obituary at www.McInnisandHolloway.com.

Services for Steve TAKACS
There are no events scheduled. You can still show your support by sending flowers directly to the family, or planting a memorial tree in memory of Steve TAKACS.
Visit the Tribute Store

Share Your Memory of
Steve
Upload Your Memory View All Memories
Be the first to upload a memory!
Share A Memory
Send Flowers