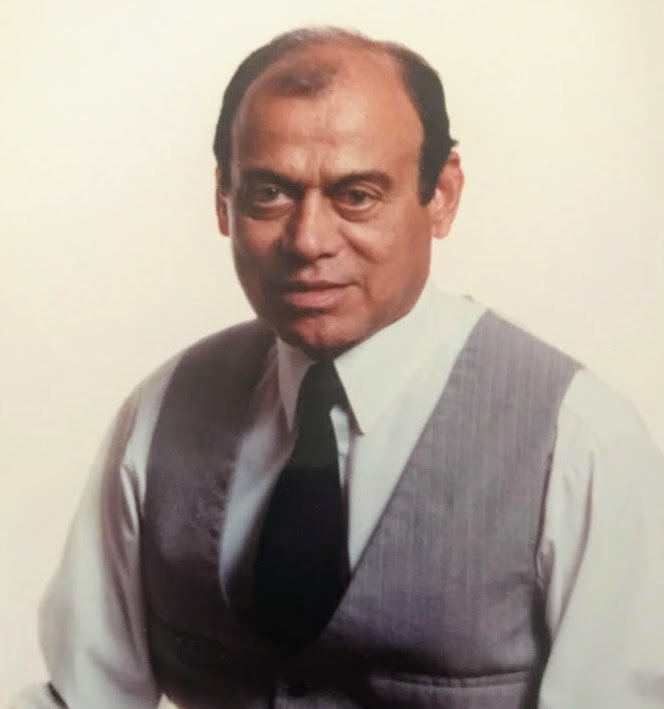 Ollie was born in Bandra, Mumbai, India, on February 11th, 1939, the eldest son of Anthony Julius Pereira of Raia, Goa and Maria Amalia Noronha of Verna, Goa. He and his sisters (Rosita, Millicent and Lira) and brothers (Vivian Joseph and Quirino) divided their time between Bandra and Goa.

An animated storyteller and a lover of great adventure, great mischief and great food, Ollie was often heard weaving tales about his many travels, his misspent youth at St. Stanislaus’ school and St. Xavier’s College, kite flying on Juhu beach or his mother’s cooking - “the best in all of India!”. His favourite tales often featured a naughty monkey named Simão, and were so magical that they have been passed on to his children, his grandchildren, and even their friends.

Ollie was gutsy and spontaneous, and had a tendency to say yes to absolutely every opportunity that presented itself. No surprise, then, that when he heard Canada was pioneering a new points-based immigration system, he was one of the very first in the world to turn up at the border. On September 24th, 1967, he and his brand new passport arrived at Montreal’s international airport. He was 28 years old, with a Chemistry degree under his belt and “eight dollars in my pocket… eight dollars!”

He immersed himself in his new life in Montreal, meeting new friends, learning to ski and quickly appearing fluent in Quebecois French thanks to his unusual but ingenious system of writing Quebecois phrases - local pronunciation and all - using Hindi’s phonetic alphabet.

As a chemist, he quickly worked his way up to Lab Supervisor at Seagram’s, and soon sponsored his younger brother Vivian Joseph to join him in Montreal. Ollie’s new friends introduced him to Winnipeg-born Mary Elizabeth Luce, daughter of William Patrick Gahan Luce and Marie Dorothy Doiron, also newly arrived in Montreal. After a whirlwind romance, they were married on August 10th, 1968 at St. Ignatius Church in Winnipeg, Manitoba. Never one to fade into the crowd, Ollie was reportedly a “smash hit, a piece of exotica” in small town Winnipeg, married in a black Nehru jacket and with a bold red Nehru jacket as his going away outfit.

Ollie and Mary had two children together, Michael (1972) and Janis (1974), both of whom inherited his sense of adventure.

After moving to Alberta in 1977, Ollie started a new job as supervisor at the City of Calgary’s water treatment plant in Fish Creek Provincial Park. Much to the delight of his co-workers, he made the most of his 12-hour shifts, teaching them Cribbage and Bridge tactics while slowly simmering homemade chicken curries in the staff room. He retired with 25 years of service, earning one gold watch, dozens of new friends, and thousands of compliments on his Murgh Masala.

Ollie believed life was about embracing challenges, and he will be especially remembered for his passion for learning and for his incredible ability to master anything he put his mind to, whether it was a new language, sport or science. He could switch fluidly between English, French, Portuguese, and Hindi and sprinkle in some Konkani, Spanish or even Mandarin for good measure. He’d just as easily win a game of pool as a game of ping pong or soccer, rattle off the entire periodic table or outwit you in a debate about theology. He would be a decent dancer one day, and casually win seven ballroom dancing trophies the next.

Whether it was his unassuming nature or a love of keeping people on their toes, he often chatted animatedly about his passions but never about his mastery.

Top of his learning list, of course, was language - he loved analysing the commonalities between languages and discovering the origins and evolution of every word and idiom. Ollie loved to make people smile by surprising them with facts about their own language - pick a word, any word, in any language, and he would tell you its journey from Sanskrit. Even in his final months, he was heard chatting excitedly to nurses in Hindi, teaching them which words it had in common with Welsh and Farsi. And it didn’t stop there - in his 60s, when Ollie’s family thought nothing else could surprise them, there he was learning Mandarin… carefully copying out the correct pronunciations using his Hindi alphabet.

Ollie was charismatic and dynamic, a true social butterfly. Wherever he went, which was absolutely everywhere, he was immediately adopted and invited into people’s homes, swapping stories and laughter for home cooking. He was connected to his community as well, volunteering as a Big Brother, at Heritage Park and at the local care home, and chatting with his elderly friend Gladys about her latest knitting project.

Ollie was a man of contrasts. Look in on his life one day and you would find him waking early, having his 40 grams of porridge, watering his many plants and then a two-hour walk, rain or shine, through Fish Creek Provincial Park. Making tea - “always from leaves, these little bags are tasteless!” - with exactly seven-eighths of a teaspoon of Kenyan and one-eighth of a teaspoon of Earl Grey, two ounces of half-and-half cream and a heaping teaspoon of soft brown sugar. Sitting bolt upright - “good posture costs absolutely nothing!” - and painstakingly copying out the latest Sudoku puzzle to send to his daughter in the post before solving it himself. In pencil, of course, never pen - “Only Michael can solve these in pen - the rest of us are dummies!” Putting on Coke-bottle glasses to read a chapter on the nutritional benefits of mangoes - “good for health!” Chopping exactly an inch of ginger and two cloves of garlic and patiently browning two small onions as the base for his evening meal.

And then the next day, there he would be in Cambodia, or Guatemala, or Bulgaria, or wherever the wind took him. His single change of clothes and his too-large toque folded neatly into a leather racquetball bag, a huge grin on his face, ready for the next adventure.

What a big life. His joy was contagious, his stubbornness legendary, his sense of adventure inspiring. It is with both sadness and hope that we send him on this new adventure.

Ollie is also survived by his three sisters, Rosita Britto, Millicent Pereira, and Lira Lobo in Mumbai, India; by his brother and sister-in-law Vivian Joseph and Maria Genevieve Pereira in Montreal, Quebec; and by his niece and God-daughter, Gillian Pereira in Châteauguay, Montreal.

He is also survived by countless cousins and friends around the world.

Ollie was predeceased by his brother Quirino and brothers-in-law, Alfred Lobo and Lazarus Britto.

In light of the current circumstances, many of Ollie’s family and friends may be unable to attend the services. Please be reassured that he is no doubt as adventurous in spirit as he was on Earth, and your love and prayers will reach him wherever he is.

Funeral Services will be held at McINNIS & HOLLOWAY (Crowfoot, 82 Crowfoot Circle NW, Calgary, AB), on Wednesday, September 9, 2020 at 2:00 p.m.  Condolences, memories and photos may be shared and viewed on Ollie’s obituary at www.McInnisandHolloway.com.

Ollie’s family will arrange for memorial services and scattering of ashes in Montreal and India in future years.

Ollie’s children would like to thank the wonderful teams at AgeCare SkyPointe, South Health Campus, and Extendicare Hillcrest for their care and compassion.

Share Your Memory of
Orlando (Ollie)
Upload Your Memory View All Memories
Be the first to upload a memory!
Share A Memory
Send Flowers